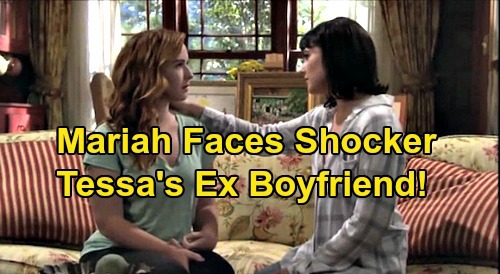 The Young and the Restless spoilers tease that Tessa Porter (Cait Fairbanks) will soon get a shocking offer. As Y&R viewers know, Tessa has been working hard on her music career. She wants nothing more than for her career to take off and to embark on life as a professional musician. Mariah Copeland (Camryn Grimes) has been managing her behind the scenes, but it’s been a while since viewers have seen any movement on that front.

But soon, Tessa will get an amazing offer. According to Y&R spoilers, she’ll get a text from a well-known singer named Tanner Watts (Chase Coleman), who will request a meeting with her. And it seems that Mariah will see the text and get excited. As Tessa’s manager, she’ll assume that the text is all about Mariah’s music and she’ll probably want to celebrate and brainstorm what they’re going to say to Tanner when the meeting occurs.

But Tessa won’t be entirely thrilled about Tanner’s reach out, which will puzzle Mariah a bit, but according to Y&R spoilers, Mariah will just chalk it up to anxiety over facing an incredibly exciting opportunity. After all, if someone like Tanner wants to talk to Tessa, then that could mean that her big break is possibly coming.

Well, it seems that Tessa will meet with Tanner privately, and as it turns out, it won’t be their first meeting. These two will already know each other, but how? Y&R spoilers indicate that there will have been lot of changes in Tessa’s life since they were last acquainted, and that leads us to wonder if perhaps the two could have been an item in the past.

And since Y&R spoilers say that Tessa won’t be thrilled to see Tanner, it could be the case that their relationship didn’t end on a particularly positive note. At any rate, there will be something lurking in their shared past that will make Tessa not the most receptive to Tanner now.

But then Tessa will hear what Tanner has to offer. He’ll tell her that he has heard some of Tessa’s music online, and that he would like her to go on tour with him as his opening act. Turns out, whatever was between them in the past will really give Tessa pause as she considers this offer. Mariah, on the other hand, will be overjoyed for Tessa, and she’ll see this as a real opportunity to jump-start Tessa’s career.

According to Y&R spoilers, Tessa will then share some surprising news with Mariah, and it looks like it could involve the nature of her past relationship with Tanner. Might Mariah learn that Tessa had a relationship with Tanner? That would certainly be big news, and it would shed some light on why Tessa’s not overjoyed about the prospect of spending time on the road with Tanner.

We’ll see what happens here, but all signs are pointing to Tessa and Tanner having some sort of past together, and if that’s the case, then she and Mariah will really need to think about whether it’s wise for Tessa to go on the road with her ex.

Do you think that Tanner is Tessa’s ex? Stay tuned to the CBS soap and don’t forget to check CDL often for the latest Young and the Restless spoilers, updates, and news.