The Young and the Restless Spoilers: The Redemption of Tessa Porter – Did Y&R Achieve Their Goal? 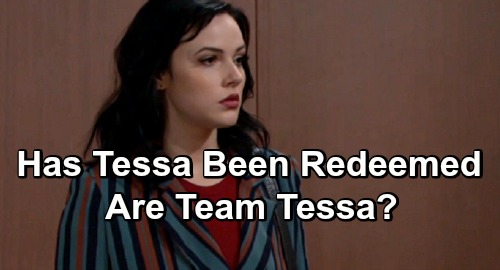 The Young and the Restless spoilers reveal that the CBS soap has tackled a redemption project. They’ve been working hard to show growth and positive changes in Tessa Porter (Cait Fairbanks). Some Y&R fans don’t seem convinced Tessa deserves another chance, but there are some excellent reasons to give her one.

For starters, we should remember Tessa’s difficult background. Tessa grew up in a rough part of Chicago with a drunk, abusive father who worked in the drug business. Her mother got hooked and would often disappear, so Tessa basically had to raise her little sister, Crystal Porter (Morgan Obenreder).

That’s crucial since Tessa served as a fill-in mom long before she was ready. Her entire life was about protecting Crystal no matter the cost. It explains a lot about Tessa’s typical coping strategies and the mistakes she’s made.

This is someone who fled her home to avoid being raped by her dad’s drug associates. Tessa was on her own and never had anyone to guide her. As Mariah Copeland (Camryn Grimes) once pointed out, Tessa lived in a world where it was take or get taken. Protection in some form has always been the driving force behind Tessa’s mistakes, even if that sometimes meant protecting herself.

Since she first came to town, Tessa has never – not once – done anything because she was trying to be cruel. People still got hurt thanks to Tessa’s actions, but that wasn’t her true motive. Anyone who accuses Tessa of being vile and vindictive has no evidence to back it up.

The blackmail pushed some fans too far, but was that really so bad by soap standards? Tessa didn’t steal any babies or plot any murders. She didn’t try to blow anyone up. She didn’t find a doppelganger in a Peruvian prison and let him repeatedly violate an unsuspecting woman. Tessa simply demanded money to protect her girlfriend and sister.

Tessa was viciously attacked by the thugs threatening her and feared Mariah or Crystal would be next. Strip away any wealthy Young and the Restless character’s funds, pile on the debt and put his or her loved ones in danger. You can bet that character would blackmail if necessary.

Besides, Nikki Newman (Melody Thomas Scott) never missed the cash. Tessa upped the total to protect her identify, but it was still like spare change for the Newmans. Nikki probably spends more than $250k on hair care products and stationery for the ranch. Everything except the lifesaving $20,000 went back to Nikki anyway. As for Tessa’s deception, pretty much all soap characters are guilty of lying.

After taking responsibility, Tessa tried her best to redeem herself. From performing at kidnapper Nikki’s vigil to helping Mariah organize a potential rally for the cover-up crew, Tessa has consistently been supportive and kind. That was never more evident than when Tessa pitched in with Dina Mergeron (Marla Adams) at the park and volunteered to sing at her new facility.

Tessa told Ana Hamilton (Loren Lott) to burn her contract, which could’ve made her a fortune. She was willing to walk because she’s grown into someone she can be proud of, and Ana was trying to turn her into somebody else. Tessa stood up for herself and her creative vision. She’s come a long way from her con artist past and the whole journal fiasco, so she absolutely deserves credit for that.

Tessa also stepped up against Mariah’s stalker, which let her protective side shine through. She handled “brick boy” Jared like a boss! Tessa is tough, quirky and fun. What’s not to like about a messy character who turns her life around but keeps her edge when she needs it?

Although she’s had some screwups just like everybody else, Tessa is more than her mistakes. She’s the girl who gets chased by geese on picnics, makes burnt pancakes and impulsively dances at Crimson Lights. Tessa is someone who wanted to change and has spent several months proving that she has. None of that adds up to the villain some viewers make her out to be.

Tessa’s redemption arguably worked because she’s a good person who’s been forced into terrible situations. She just had to make better choices and be honest, which is exactly what she’s done. It’s unfair to trash Tessa for her flaws without recognizing the sweetness at her core. That balance – along with Cait Fairbanks’ heartfelt, endearing portrayal – is what makes Tessa a compelling character.