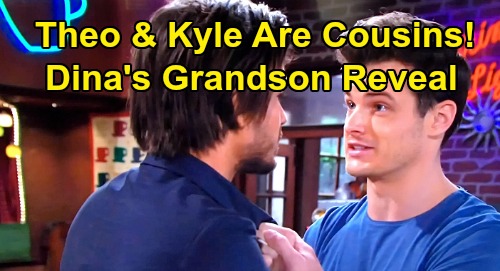 The Young and the Restless (Y&R) spoilers tease that Jack Abbott (Peter Bergman) and Traci Abbott (Beth Maitland) are on the verge of uncovering a major family secret. Y&R fans know they’ve already found some interesting clues. The first one came from Dina Mergeron (Marla Adams), who gushed over Stuart Brooks – the newspaper man she once thought was so dreamy.

With a little help from Stuart’s daughters, Traci and Jack scored a letter Dina wrote to Stuart decades ago. That offered a few more hints. Dina included a Shakespeare quote from Hamlet: “I must be cruel only to be kind; thus bad begins, and worse remains behind.” There were also smudges on that letter, which suggested Dina was crying when she wrote it.

Dina also pointed out that she wouldn’t be in touch much in the months ahead – which seems like a tell-tale sign that she was covering up a pregnancy. That also fits with the quote. It seems like Dina was breaking Stuart’s heart with the goal of sparing him. She may have thought it was best to carry the baby to term secretly and give it up for adoption.

On the episode airing October 22, another clue surfaces about the prom afterparty. Traci finds a note on the back of an invitation, which is from Stuart. He pleads with Dina to attend this party and let him change her mind. Stuart must’ve been begging Dina to stay in town and be with him – perhaps not even knowing that she was carrying his child.

Of course, it’s also possible that Stuart knew and never said anything, but it makes more sense this to be Dina’s secret alone. Regardless, if Dina did give a baby up for adoption, that presents some intriguing story possibilities. The question to consider first is: Which current Genoa City resident will be connected to her? Y&R buzz suggests Theo Vanderway (Tyler Johnson) may be tied to this hot plot.

Since we don’t know much about Theo’s past, it would be easy for The Young and the Restless to write him into this storyline. One of Theo’s parents may be Dina’s son or daughter, which would make Theo her grandson – and Kyle Abbott’s (Michael Mealor) cousin! It’s worth mentioning that Eric Vanderway (Jon Briddell) will make an appearance on November 7. That could be part of this Abbott family mystery.

Theo told Summer Newman (Hunter King) that his father died, and he seemed genuine when he shared the story. Since Briddell’s seemingly only around for one day, perhaps he’ll play Theo’s dad in a flashback episode. It seems like Y&R would do more with him if Theo’s dad were actually alive.

Then again, Eric could be a different relative and potentially make Theo fit in all this another way. Whatever the case, it’s looking more and more like Theo’s related to Kyle. There have already been some rumblings about Theo getting a controversial story. He’s arguably not a well-liked character, so tying him to Dina and the Abbotts would indeed be controversial.

Do you think the Abbotts’ search for answers will lead to Theo? Could he be Dina’s grandson and Kyle’s cousin? The Young and the Restless spoilers say some exciting drama’s ahead no matter what! We’ll give you updates as other Y&R news comes in. Stay tuned to the CBS soap and don’t forget to check CDL often for the latest Young and the Restless spoilers, updates and news.