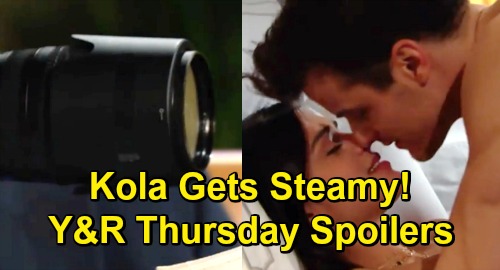 The Young and the Restless (Y&R) spoilers for Thursday, April 11, tease that Kyle Abbott (Michael Mealor) will take Lola Rosales (Sasha Calle) up on her offer. In Wednesday’s episode, Lola suggests she wants to see what they could be together. She thinks she should get a room at the athletic club, especially since Summer Abbott (Hunter King) is out of town with Phyllis Summers (Gina Tognoni).

Of course, Lola and Kyle don’t know they’re being watched by Phyllis’ spy. Someone will continue to snoop and snap pictures on Thursday. That’ll spell trouble since Kyle will indeed head up to a suite with Lola. The Young and the Restless spoilers say Kyle just won’t be able to resist temptation. He’s wanted to make love to Lola for a long time, so he’s not letting this chance pass him by.

Naturally, Kyle will want to make sure Lola’s all in on this. She’s never had sex before, so doing it with Kyle will mean turning in her virgin card. Kyle understands that this is a big step for Lola, which is why he won’t pressure her. The ball will be in Lola’s court, but she’ll take it and run with it. Y&R spoilers state that they’ll strip down and hit the sheets, so it looks like there’s no stopping them now.

Since Phyllis’ spy should capture them entering and exiting the room, that’ll serve as proof of Kyle’s infidelity. Phyllis will have what she needs to blackmail Kyle, but you can expect some curveballs for all parties involved. Even Phyllis herself should be surprised by some bombshells that are brewing.

Other Young and the Restless spoilers say Billy Abbott (Jason Thompson) will take care of business. He’ll set out to accomplish something in Thursday’s episode and it could relate to Victor Newman (Eric Braeden). There’s still a major mystery to uncover, so Billy may keep at it.

On Wednesday, Victoria Newman (Amelia Heinle) holds a high-stakes poker game in her suite, but that doesn’t lure the elusive “Spider” out of hiding. Will Billy attempt to track this guy down himself on Thursday? Will he try another tactic instead? Regardless, Billy will want to help Victoria get some answers about this mysterious gambler and Victor’s connection to him.