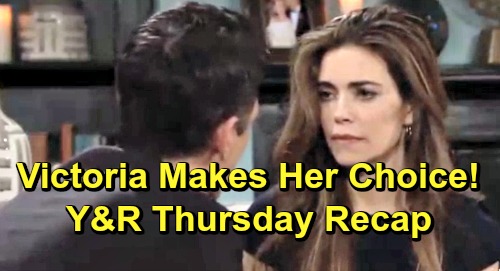 The Young and the Restless (Y&R) spoilers and recap for Thursday, April 18, tease that Sharon Newman (Sharon Case) will get an unexpected visit. Mariah Copeland (Camryn Grimes) and Tessa Porter (Cait Fairbanks) will explain the whole brick situation, so Sharon will assume this might be connected to the attack Tessa faced last year. However, Mariah will mention the gossip-related note and suggest this is about her instead.

Rey Rosales (Jordi Vilasuso) will be around to get updates on all this. He’ll offer to round up a patrol car to watch Mariah and Tessa’s apartment building, but Sharon will think they’d be better off staying at the cottage. Tessa will back Sharon up on that, but Mariah will insist it’s not that serious. She’ll want to go home to their own place, so Tessa will promise to watch over her for Sharon.

Y&R fans will also see steamy scenes for Rey and Sharon on Thursday, so “Shey” fans will want to tune in. At Victoria Newman’s (Amelia Heinle) place, she’ll have some time to think about Billy Abbott’s (Jason Thompson) proposal. Phyllis Summers’ (Gina Tognoni) interruption will make sure of that.

The Young and the Restless spoilers say Phyllis will berate Billy over how he treated Summer Abbott (Hunter King), but she won’t spill the sex beans…for now. Instead, Phyllis will push Billy for capital. She needs a fresh start, so she’ll hope Billy can help her out with the funding she needs.

Billy would be wise to cough it up since Phyllis could cause major drama in his relationship with Victoria. She obviously wouldn’t approve of Billy sleeping with Summer. Nevertheless, Victoria will remain in the dark for now.

During a moment alone with Billy, Victoria will decide she can’t accept his proposal yet. This might be a topic they can revisit eventually, but Victoria just won’t be ready.

Meanwhile, Ana Hamilton (Loren Lott) and Jett Slade (Gilbert Glenn Brown) will nearly back out of their upcoming performance. As a result, Devon Hamilton (Bryton James) will make another pitch about why he wants them to sing at the restaurant’s opening night. Fortunately, the father-daughter duo will get on board again.

Devon will also help Elena Dawson (Brytni Sarpy) out with her what-to-wear dilemma. He’ll lend Elena some of Hilary Hamilton’s (Mishael Morgan) dresses as options, so this is clearly a huge step for him. It should be bittersweet since these dresses are a tough reminder of Hilary, but they’ll carry on her memory in a way.