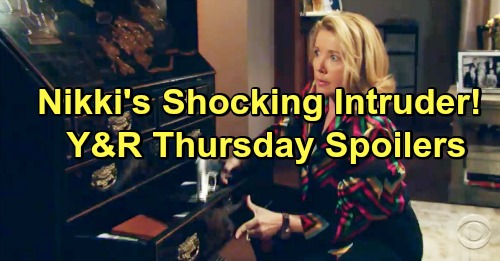 The Young and the Restless (Y&R) spoilers for Thursday, January 17, tease that Ana Hamilton (Loren Lott) will exhibit suspicious behavior. Neil Winters (Kristoff St. John) will decide he’s got a reason to fret about Devon Hamilton’s (Bryton James) secretive sister. He was hoping Ana could come to Genoa City and help Devon, but who’s helping Ana? She’s clearly keeping a few things from her family.

For starters, Ana doesn’t want to take credit for the song she wrote for Fenmore “Fen” Baldwin (Zach Tinker). She gave him a rather flimsy story about getting taken advantage of in the past, but that doesn’t exactly hold up now. Devon may have moments of stubbornness sometimes, but Ana loves and trusts him. He wouldn’t cheat her out of her writing credits, money or anything else.

There seems to be more going on with Ana, but she’ll choose to stay tight-lipped and hope Fen does the same. However, that won’t stop Neil from sensing that something’s off. He’ll realize Ana’s distracted and perhaps not quite herself. Neil might worry that Ana’s been too stressed by all Devon’s drama, but maybe her own drama is the real problem.

Ana tends to lash out when people get too nosy, so she’ll probably get defensive and have an outburst on Thursday. Y&R spoilers say Ana will do whatever it takes to protect herself, even if it means leaving those closest to her in the dark. Over with Nikki Newman (Melody Thomas Scott), she’ll also hope to protect herself. Since she’ll pick up a gun, Nikki’s method will be far more extreme.

The Young and the Restless spoilers say Nikki will look frightened by someone entering the ranch. Of course, Nick Newman (Joshua Morrow) brought in extra security to make Nikki feel safe. That’s why Nikki will be particularly nervous when she hears somebody in her home and a shadow appears along the wall.

Although The Young and the Restless spoilers say Nikki will land in a dangerous situation, that may be a bit exaggerated. The only danger here may be from her! Waving a gun around might not be the smartest plan if the unexpected visitor turns out to be Victor. Since he agreed to let Michael Baldwin (Christian LeBlanc) work his magic and get him out on bail, Victor might surprise Nikki by walking through the door.

It sounds like some great scenes are coming up. We’ll give you updates as other Y&R news emerges. Stick with the CBS soap and don’t forget to check CDL often for the latest Young and the Restless spoilers, updates, and news.