BY Heather Hughes on January 2, 2019 | Comments: one comment
Related : Soap Opera, Spoiler, Television, The Young and the Restless 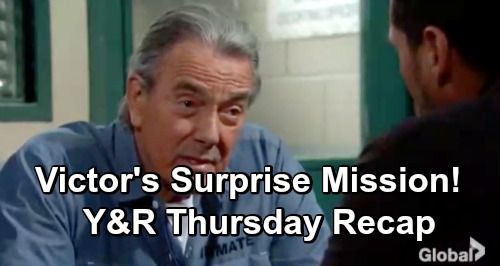 The Young and the Restless (Y&R) spoilers update and recap for Thursday, January 3, tease that Nikki Newman (Melody Thomas Scott) will get updates on the charges against Victor Newman (Eric Braeden). She’ll be upset that Rey Rosales (Jordi Vilasuso) is trying to pin J.T. Hellstrom’s (Thad Luckinbill) murder on him. Nikki will argue that Rey would be better off finding the arsonist or the hit-and-run driver.

Nick Newman (Joshua Morrow) will want Nikki to concentrate on her recovery. He’ll vow to assist Victor if Nikki will just do that for him. Once Nick takes off, Nikki will express concern to Victoria Newman (Amelia Heinle). She’ll think Victoria should go after Nick and see what everyone knows so far.

At the GCPD, Nick and Victoria will visit their dad. The Young and the Restless spoilers say Victor will be calm and confident. He won’t think Christine Williams (Lauralee Bell) has enough proof to make the charges stick. In a moment alone with Nick, Victor will ask a question and expect honesty. He’ll want to know if Nick’s the one who killed J.T.

Nick will think the suggestion’s ridiculous, but Victor will point out that his son was behind the impersonation plot and the hacking drama. When talk turns to the fire, Nick will insist that he wouldn’t let Nikki face that kind of fear and stress.

Victor will finally be convinced of Nick’s innocence, so they’ll discuss their game plan. Since they need to find out who started the blaze, Nick will have to handle it. He’ll assure Victor that he’s got this.

At Victoria’s place, Billy Abbott (Jason Thompson) and Reed Hellstrom (Tristan Lake Leabu) will talk about Victor. Reed will want to trust that his grandpa’s innocent, but he’ll have his doubts.

Later, Billy and Victoria will have a meeting about their recent kiss. They’ll establish that the timing isn’t ideal and that Victoria wouldn’t be a rebound. Both Victoria and Billy will need time to mull over a possible reunion.

Next, it’ll be Cane Ashby’s (Daniel Goddard) turn to speak with Vikki. She’ll argue that if this is about their lip lock, she’s not interested in chatting.

Cane will maintain that the kiss has been erased. It never happened as far as he’s concerned. Instead, Cane will want to talk about their sons. He’ll think it would help Charlie Ashby (Noah Alexander Gerry) and Reed if they told Nikki the truth.

At the hospital, the teens will do just that. With Cane and Victoria backing them up, Reed and Charlie will come clean to Nikki about the hit-and-run.

Nikki will note that she wasn’t blameless that night. She drunkenly stepped off the curb, so she’ll think they should all just forgive one another. Nikki will think Cane and Victoria can handle their punishment without calling the cops.

Once Cane and the boys are gone, Y&R spoilers say Nikki will open up to Victoria. She’ll point out that she knows how keeping a secret like that can take a toll.

Nikki will shock Victoria by announcing that she plans to make a confession of her own. She’ll think it’s time for her to admit she killed J.T. Over with Jill Atkinson (Jess Walton), she’ll tell Cane about her relationship troubles. Jill will mention that she’s on a break with Colin Atkinson (Tristan Rogers), so he’ll talk about how he’s falling short as a husband, too.

The Young and the Restless spoilers say Jill will give Cane a pep talk before turning her attention to Billy. When she finds out Billy’s been hanging out with Victoria more often, she’ll love the idea of a reunion. Jill won’t think Billy should let this chance slip away.

It looks like things are heating up in Genoa City. We’ll keep you posted as other Y&R news comes in. Stay tuned to the CBS soap and don’t forget to check CDL often for the latest Young and the Restless spoilers, updates, and news.

Victor and Nick make a pact today on #YR. pic.twitter.com/N2Vp78cJrY