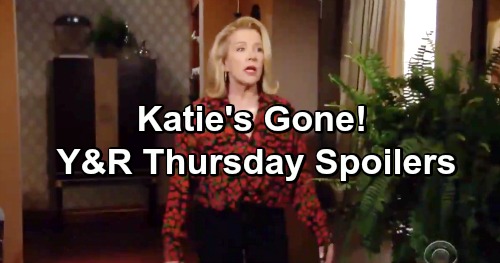 The Young and the Restless (Y&R) spoilers for Thursday, January 31, tease that Nikki Newman (Melody Thomas Scott) will make a serious blunder. It looks like she’ll leave Katie Abbott (Sienna Mercuri) alone for a just a little too long. That’ll lead to some scary moments for several crucial characters.

Y&R fans know Katie’s been chatting with a “friend” that only she can see. We also know that someone’s got the place bugged and set up with video monitoring round the clock. It seems this person’s been communicating with Katie through a two-way audio system, but he or she will likely show up in the flesh on Thursday.

The Young and the Restless spoilers say Katie will go missing from the ranch. Nikki will search high and low, but the tot won’t be anywhere around the house. After Victor Newman (Eric Braeden) gets the terrible news, he’ll call the police immediately. Victor will push the cops to send someone over as quick as they can. He’ll be distraught over his granddaughter’s disappearance and the danger she might be in.

Naturally, Nikki and Victor will also call Katie’s parents soon. Billy Abbott (Jason Thompson) and Victoria Newman (Amelia Heinle) will be horrified over this apparent kidnapping. It seems the tormentor may have taken Katie from the home, so this person may plan to use her against Victor and the girls’ night gang.

If J.T. Hellstrom (Thad Luckinbill) is the one behind this, he’d have no trouble getting Katie to tag along. She knew J.T. quite well when he was planning to become a family with Victoria, Katie, Johnny Abbott (Holden and Ryan Hare) and Reed Hellstrom (Tristan Lake Leabu). Regardless, this is sure to be a nightmare for both the Newman and Abbott clans.

Since Billy already suffered through Delia Abbott’s (Sophie Pollono) death, he’ll really be on edge. That’ll lead to some explosive moments as he rants about his child’s safety. Billy won’t think he can survive losing another kid. It appears he’ll rant at Nikki until Nick Newman (Joshua Morrow) feels the need to intervene.

The Young and the Restless spoilers state that Nick will lose his temper in Thursday’s new Y&R episode, January 31. He may go off on Billy for berating this distraught grandma. Nikki obviously never intended for this to happen, so Nick may think they should all just come together for Katie’s sake. It’s possible Nick will explode over something else first, but we should at least see some Billy and Nick conflict by Friday.

Finally, Lauren Baldwin (Tracey E. Bregman) will put Kyle Abbott (Michael Mealor) in a tough situation. She’ll rope him into a modeling project with Fenmore “Fen” Baldwin (Zach Tinker), but you can bet there’ll be some tension. Fen tends to get on Kyle’s last nerve, so their photoshoot could go awry!