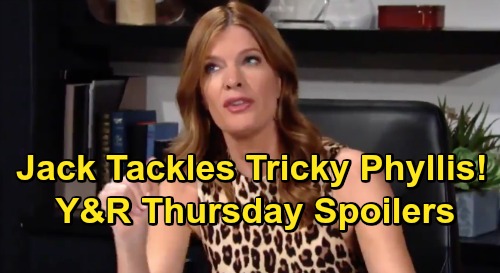 The Young and the Restless (Y&R) spoilers for Thursday, July 4, tease that we’ll see some wild Independence Day fun. The carnival will continue, so expect other Y&R characters to check out the games, prizes and everything else this big event has to offer. It’s always nice when the show does a little something different, especially on holidays like the Fourth of July.

Cane Ashby (Daniel Goddard) will end up having a carnival celebration with Traci Abbott (Beth Maitland). She recently completed her new book, so Cane will think she should let loose and have a blast. Of course, Traci would enjoy being anywhere as long as she’s with Cane. She’s really falling hard, so she’ll love taking in the sights and sounds of this carnival with Cane by her side.

Mariah Copeland (Camryn Grimes) and Tessa Porter (Cait Fairbanks) are also set to hit the carnival this week, so Independence Day seems like the right time. It looks like they’ll run into Kevin Fisher (Greg Rikaart) while they’re there. Kevin was the first person Mariah ever told about her more than friendly feelings for Tessa, so he should be pleased to see them enjoying themselves as a solid couple.

Billy Abbott (Jason Thompson) and Victoria Newman (Amelia Heinle) will head to the carnival at some point as well. They’ve both had a lot on their plates, so they should appreciate having a chance to unwind. Victoria and Billy had better soak in this relaxation while they can! The Young and the Restless spoilers say another round of drama’s set to hit soon.

Elsewhere, Phyllis Summers (Michelle Stafford) will once again cause problems for Jack Abbott (Peter Bergman). She’ll issue a challenge of some sort, so Jack Abbott (Peter Bergman) will have to decide how to handle it. The Young and the Restless fans know Jack’s found his moxie lately. He rarely backs down from a fight, especially when someone like Phyllis is pushing his buttons.

That could mean Jack will push right back, but he’ll have to be smart about his strategies. Dark Horse happens to be the landlord of Jabot’s Jaboutiques, so Phyllis has some leverage. Jack’s counting on Adam Newman (Mark Grossman) to be a good friend and keep Phyllis under control, but can anyone truly control Phyllis? She’s blackmailing Adam, so that’s an extra factor to consider,

Besides, Dark Horse clearly isn’t Adam’s priority at the moment, so Jack would be wise to watch out for himself! We’ll give you updates as other Y&R news comes in. Stay tuned to the CBS soap and don’t forget to check CDL often for the latest Young and the Restless spoilers, updates and news.