BY Heather Hughes on June 5, 2019 | Comments: one comment
Related : Soap Opera, Spoiler, Television, The Young and the Restless 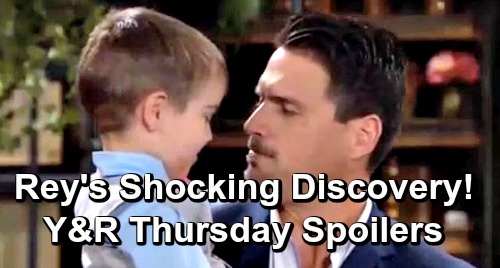 The Young and the Restless (Y&R) spoilers for Thursday, June 6, tease that Nick Newman (Joshua Morrow) will be on the hunt for evidence. After Wednesday’s intense showdown with Adam Newman (Mark Grossman), Nick will be more determined than ever to push his brother out of the picture. He’ll need some serious dirt to do it, so he’ll get to work and order his head of security to do the same.

Rey Rosales (Jordi Vilasuso) will continue to keep an eye on Adam and dig around wherever he can. The Young and the Restless spoilers say Rey will stumble across something shocking on Thursday’s new Y&R episode, June 6.

Will Rey get the proof Nick’s looking for? It may not be enough to stop Adam’s plans, but this secret could create a serious hurdle. Rey will undoubtedly pursue this lead and see what else he can find out.

Of course, Y&R fans know Adam recruited Phyllis Summers (Gina Tognoni) for his Dark Horse project. He’s hoping to score some dirt of his own and use it as leverage in the custody battle. Adam’s willing to whatever it takes to raise Christian Newman (Jude and Ozzy McGuigen), so Nick’s company is certainly in jeopardy right now.

Other Young and the Restless spoilers say Mariah Copeland (Camryn Grimes) will have some news for Devon Hamilton (Bryton James). She’ll head over to the penthouse for a meeting and hope Devon understands her perspective.

After Hilary Hamilton (Mishael Morgan) died, Mariah stepped up to host alone and was well-liked by GC Buzz viewers. However, it turns out Mariah doesn’t exactly love the gig.

Mariah recently confessed that she finds being on TV pretty bizarre. She’s not sure it’s the right path for her anymore, especially since stalkers like Jared are creeping out there. It seems the stalker storyline was meant to push Mariah into another career, which Devon might be able to help her with.

The Young and the Restless spoilers state that Mariah will tackle a new project. She’ll sign up for an exciting challenge on Thursday, which may involve a job at LP. Neil Winters’ (Kristoff St. John) will encouraged Devon to be generous with opportunities, so Devon may try to honor Neil’s wishes.

Does that mean Devon will try to get Tessa Porter (Cait Fairbanks) back at the label, too? Whether Tessa returns to LP now or later, it’ll indeed happen. Naturally, there’ll be some pushback from Ana Hamilton (Loren Lott).

Devon named Ana the co-head of LP, so plenty of clashing will go down in the weeks ahead. Mariah’s new role may once again make Ana feel like her territory’s being invaded.

It sounds like another power trip’s on the way for Ana! We’ll give you updates as other Y&R details emerge. Stay tuned to the CBS soap and don’t forget to check CDL often for the latest Young and the Restless spoilers, updates and news.