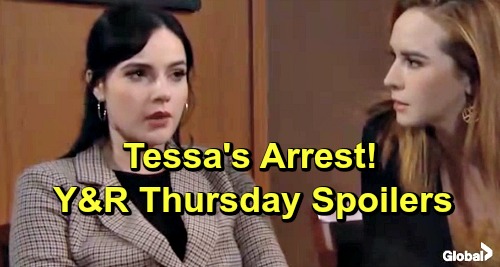 The Young and the Restless (Y&R) spoilers for Thursday, March 7, tease that Jack Abbott (Peter Bergman) will need Kerry Johnson’s (Alice Hunter) support. He wants to pull off a Jabot takeover along with Billy Abbott (Jason Thompson), who’s equally concerned about Phyllis Summers (Gina Tognoni) remaining in charge. The company could be in trouble thanks to the scandal Phyllis is wrapped up in.

Phyllis claims she can handle the drama, so Kerry’s been backing her up. These friends even shake on a new direction for Jabot in Wednesday’s Y&R episode. Phyllis feels like Kerry is the one person she can rely on, but Jack will put their alliance in jeopardy on Thursday. He’ll pressure Kerry to give him inside info and help knock Phyllis off the throne.

Jack will beg Kerry to do this for the sake of the company, but she’ll push back. She won’t know if she can betray Phyllis, but Jack will keep at it. He’ll hope he can make Kerry see things from his perspective. Of course, The Young and the Restless spoilers indicate that Kerry isn’t so innocent herself! She’s got some dark secrets, so betraying Phyllis may be the least of her problems.

Meanwhile, court will be back in session. Rey Rosales (Jordi Vilasuso) will take the stand this time around. He’ll testify about professing his love for Sharon Newman (Sharon Case) on Valentine’s Day, so Brittany Hodges (Lauren Woodland) will be working the emotional manipulation angle. She’ll want Rey to admit he was just saying that to pry a confession out of Sharon.

Rey obviously meant what he said, but suggesting it wasn’t true would help Sharon. She could certainly use some assistance after Tessa Porter’s (Cait Fairbanks) damaging testimony. Tessa does her best to downplay Sharon’s role in the kidnapping on Wednesday, but it could still be an issue.

After all, Mariah Copeland (Camryn Grimes) was enraged when she found out what Sharon took part in. She pointed out that Sharon is a social worker who helps counsel battered women. It’s not a good look for her to participate in the kind of behavior she stands against daily.

If it was a problem for Mariah, the jury may feel the same. Brittany needs to get them back on Sharon’s side, so maybe Rey will play a part in that on Thursday’s new Y&R episode. As for Tessa, she’ll pay the price for her own mistakes. Tessa desperately needed money to avoid another attack by vicious thugs, so she blackmailed Nikki and the others to end her nightmare. Now it’s time to face the music.

Since Tessa admits to everything in court on Wednesday, we’re betting the GCPD won’t waste much time. The Young and the Restless spoilers say Tessa will be arrested at Crimson Lights soon, so Thursday may be the day Tessa’s led out in handcuffs. It sounds like a new nightmare’s just beginning!

Y&R fans won’t want to miss Thursday’s exciting scenes. We’ll give you updates as other news comes in. Stay tuned to the CBS soap and don’t forget to check CDL often for the latest Young and the Restless spoilers, updates, and news.