BY Heather Hughes on May 1, 2019 | Comments: one comment
Related : Soap Opera, Spoiler, Television, The Young and the Restless 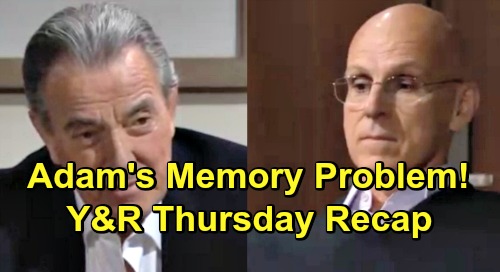 The Young and the Restless (Y&R) spoilers recap for Thursday, May 2, tease that Kyle Abbott (Michael Mealor) will treat Lola Rosales (Sasha Calle) to dinner and drinks under the stars. On Society’s rooftop, they’ll talk about how everything’s coming together for them. Kyle will promise to always be there for Lola before they share a dance. As they get close, Lola will tell Kyle she wants to make love to him.

Meanwhile, Summer Abbott (Hunter King) will complain to Nick Newman (Joshua Morrow). He’ll fume over how Kyle treated Summer, but she’ll suggest she has to let go. Nick will wonder if Summer’s holding out hope, so she’ll admit she’d like to see Kyle come crawling back. However, Nick will think Summer deserves better. They’ll end the night with a distraction consisting of ice cream and TV.

In a suite at the athletic club, Lola and Kyle will reaffirm their love for each other. They’ll kiss as the clothes come off before finally having sex for the first time. Afterward, Lola will let Kyle know it was worth the wait. She’ll think she’s right where she should be, so Kyle will contend that Lola shouldn’t ever leave.

Other Young and the Restless spoilers say Jack Abbott (Peter Bergman) will get some upsetting news. Dina Mergeron’s (Marla Adams) doctor will suggest she needs to be moved to a memory care facility. Later, Jack will confide in Lauren Baldwin (Tracey E. Bregman). She’ll clasp Jack’s hand and reassure him about the complex feelings he has about Dina.

Soon after, Dina will walk in and mistake Lauren for Jack’s girlfriend. Lauren will play along, which will earn a smile and gratitude from Jack. Y&R spoilers say they’ll also share a warm embrace, so they’ll definitely be growing closer.

At the cottage, Sharon Newman (Sharon Case) will fill Rey Rosales (Jordi Vilasuso) in on her encounter with Mia Rosales (Noemi Gonzalez). She’ll also admit this Vegas mission seems dangerous, but she’ll still be in. Rey will get the psychiatrist’s number and leave a voicemail while Sharon does some research online. She’ll discover that this doctor specializes in memory retrieval.

In Nevada, Victor Newman (Eric Braeden) will get updates in the psychiatrist’s office. The doctor will warn that the patient left their last session abruptly and add that Victor is pushing too hard. Nevertheless, Victor will push the doc to stick to the plan and keep quiet. He’ll suggest this psychiatrist doesn’t want to disappoint him twice.

Victor will eventually track down the mystery patient’s hotel room. He’ll knock on the door and assure the person on the other side that he’s not the enemy. Victor will promise he only wants to help. Of course, we know Adam Newman (Mark Grossman) is behind that door, but Y&R won’t reveal that yet.

At Crimson Lights, Nikki Newman (Melody Thomas Scott) will talk to Paul Williams (Doug Davidson) about her investigation. She’ll explain that she hired Rey, so Paul will realize finding Lola’s attacker isn’t Rey’s priority. Nikki will show Paul the article she found on the “Queen of Las Vegas,” which involves underground poker. She’ll think Victor’s too close to danger, so Paul will vow to look into it.

Back with Rey and Sharon, they’ll check in a Vegas hotel room. Next, Paul will call to scold Rey about taking Nikki’s case and neglecting the one he already had. Rey will decide he’s done with all the attacker drama, so he’ll tell Paul he’s out. Once Rey hangs up, he’ll enjoy a toast with Sharon. They’ll be eager to get some answers about Victor’s top-secret activities.