BY Heather Hughes on May 8, 2019 | Comments: one comment
Related : Soap Opera, Spoiler, Television, The Young and the Restless 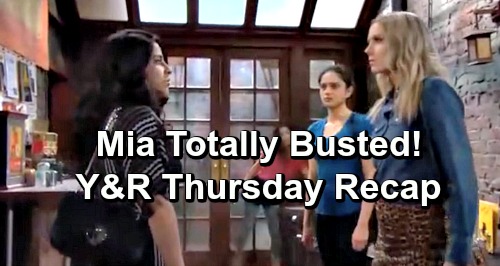 The Young and the Restless (Y&R) spoilers for Thursday, May 9, tease that Lauren Baldwin (Tracey E. Bregman) will disagree with Jack Abbott’s (Peter Bergman) decision. When she learns he turned down a partnership with Phyllis Summers (Gina Tognoni), Lauren will feel like Jack made it personal instead of focusing on business. She won’t be so sure Jack made the right call, so he’ll promise to mull it over.

Talk will turn to Dina Mergeron (Marla Adams), who now has to wear a tracker. Lauren will be sympathetic to what Jack’s going through, so he’ll appreciate her support. In New York, Theo Vanderway (Tyler Johnson) will praise Kyle Abbott (Michael Mealor) and Summer Abbott’s (Hunter King) marketing ideas. He’ll think their chemistry is great and suggest they should join him at a club.

After Kyle turns Theo down, he’ll want to get back to Lola Rosales (Sasha Calle) ASAP. Summer will chew Kyle out for missing out on the schmoozing opportunity. Back in Genoa City, Mariah Copeland (Camryn Grimes) will tag along to Tessa Porter’s (Cait Fairbanks) meeting with Ana Hamilton (Loren Lott). She’ll gripe as Ana continues to push the idea of a new look and image for Tessa.

Ana will wonder what Mariah’s problem is, but Mariah will insist Ana just doesn’t get who Tessa is. The tension will remain as Ana dismisses Mariah’s suggestion of a tie-in promotion with Kyle’s collective. Once the meeting wraps up, Tessa will be irritated with Mariah for overstepping.

Later, Mariah will confess she’s concerned about Tessa becoming a star. She’ll fear there won’t be anything left for her once Tessa’s a success, but Tessa will offer reassurance. At Society, Arturo Rosales (Jason Canela) will fill Lola in on his plan to leave town with Mia Rosales (Noemi Gonzalez). As they bicker, Arturo will admit that Rey Rosales (Jordi Vilasuso) will lock Mia up if the baby doesn’t belong to him.

It won’t take long for the puzzle pieces to fall into place. Lola will realize Mia was behind the attack, so she’ll dash off to confront her. At Crimson Lights, Lola will accuse Mia of mistaking her for Abby Newman (Melissa Ordway) that night. Abby will arrive in time for their confrontation, so she’ll point out that she doesn’t hear a denial.

Y&R spoilers say Mia will finally blurt out a confession, which will enrage Abby. She’ll want to call the cops, but Mia will beg Lola to stop her. Afterward, Mia will corner Arturo to blast him for blabbing. She’ll note that only Lola can press charges, so Arturo needs to keep her mouth shut.

At the penthouse, Ana will grumble to Devon Hamilton (Bryton James) about Mariah. She’ll think Tessa’s girlfriend needs to butt out, but Devon won’t have high hopes for that happening. He’ll hint there may be a reason why Mariah’s protective shield’s up.

Devon will also chat with Ana about Neil Winters’ (Kristoff St. John) will before turning his attention to Elena Dawson (Brytni Sarpy). Elena won’t be angry over the kiss Devon planted, but she’ll worry it was done out of pity. Devon will contend that he’d been dreaming, so it just happened. It was an impulse, so The Young and the Restless spoilers say they’ll move past it and plan another date.

At Jabot, Jack will be thrilled with the great work Kyle and Summer did in New York. After Kyle leaves to see Lola, Summer will get a call from Theo. He’ll plan to fly in with a client, so Summer will use this opportunity to her advantage. She’ll whine about Kyle spending time with Lola instead of focusing on his job, so Jack will want his son back in the office pronto.

While Summer heads off to find Kyle, Lola will pressure Abby to stay quiet about the attack. She’ll suggest that if it hadn’t happened, the doctors wouldn’t have found her liver issue in time. Lola will add that Mia wouldn’t have intentionally tried to harm her. She also won’t like the thought of her niece or nephew being born in prison.

After Lola admits Mia and Arturo are skipping town, Abby will agree to let it go. When Kyle appears, he’ll notice Lola looks troubled. Kyle will insist that they can handle whatever it is together, but Lola will remain uneasy.