BY Heather Hughes on November 13, 2019 | Comments: one comment
Related : Soap Opera, Spoiler, Television, The Young and the Restless 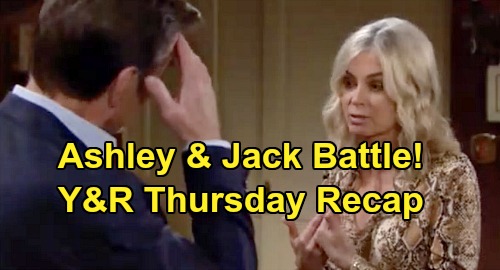 The Young and the Restless (Y&R) spoilers recap for Thursday, November 14, teases that some exciting scenes are on the way. We should note that the impeachment hearing coverage pushed back the episode meant to air on Wednesday, November 13. That episode will now air on Thursday, so let’s look at what’s ahead in Genoa City.

First, poor Connor Newman (Judah Mackey) will remain distraught over the recent hostage crisis. Chelsea Lawson (Melissa Claire Egan) and Adam Newman (Mark Grossman) will do their best to be there for Connor, but he’ll still be shaken up. After Connor asks for his old security blanket, Adam will head off to get it back from Nick Newman’s (Joshua Morrow) place.

After Nick discusses his campaign with Jack Abbott (Peter Bergman), he’ll get a visit from Nick. Y&R spoilers say Nick will demand answers about Chelsea and this whole ordeal with Simon Black (Jeffrey Vincent Parise). Adam will convince Nick that they have to focus on Connor right now, so Nick will hand over the blanket and let Adam get back to him.

At the penthouse, Adam will take a sleeping Connor upstairs before trying to get on the same page with Chelsea. The Young and the Restless spoilers say Adam will be upset over Chelsea’s deception, which their son suffered for. He’ll want Chelsea to feel like she can confide crucial things like this. Chelsea will get weepy and agree that they should work together moving forward.

Afterward, Chelsea will head back to Nick’s place and offer an explanation. She’ll admit she was ashamed and trying to shield Nick from all the chaos. Chelsea will realize this could cost Nick when it comes to his campaign.

Other Young and the Restless spoilers say Phillip “Chance” Chancellor IV (Donny Boaz) will speak with Amanda Sinclair (Mishael Morgan). They’ll go over how someone claiming to be Chance communicated via email and put her on retainer. Amanda will feel like the situation surrounding Katherine Chancellor’s (Jeanne Cooper) will could be tied to Simon. She’ll hate that she was duped and mention that she did speak with phony Chance on the phone. Amanda will suggest this man sounded older than she expected.

Over with Summer Newman (Hunter King), she’ll be reluctant to choose sides in this Theo Vanderway (Tyler Johnson) and Kyle Abbott (Michael Mealor) war. Lola Abbott (Sasha Calle) will eventually catch them laughing it up over Kyle’s glowing skin. She’ll walk in as Summer’s feeling Kyle’s smooth face, which he’s been testing products on.

At the Abbott mansion, Theo will react to Ashley Abbott’s (Eileen Davidson) incredible offer. Ashley will form a connection with Theo since neither one of them’s a blood Abbott. She’ll think Theo’s probably feeling like an outsider and will eventually drop her bomb. Ashley will urge Theo to come work for her in Paris, so a flattered Theo will agree to mull it over.

While Theo meets up with Summer for some Grand Phoenix lovemaking, Jack will send Kyle and Billy Abbott (Jason Thompson) to their corners. He’ll push them to work out their issues together, but that’s obviously not going to happen with these two!

Jack will ultimately get updates on Ashley’s offer for Theo, which will leave him angry with her. He won’t think Ashley should be trying to jet Theo off to Paris when they’re just now getting to know him. Ashley, on the other hand, will think it’d be good for Theo to get away from the cloud of suspicion in GC.

As for Chance and Abby Newman (Melissa Ordway), they’ll do plenty of flirting. Chance will even ask Abby to have a drink with him later, so he’s wasting no time! Afterward, Chance will stop by Adam’s penthouse and get some gratitude over Connor’s rescue. Adam will comment on the messes they keep getting into just before Phyllis Summers (Michelle Stafford) arrives.

Phyllis will reveal that she suspected she’d find Adam and Chance together. The Young and the Restless spoilers say Phyllis will continue to poke her nose where it doesn’t belong, so stay tuned for more revelations. We’ll keep you posted as other Y&R news comes in. Stick with the CBS soap and don’t forget to check CDL often for the latest Young and the Restless spoilers, updates and news.