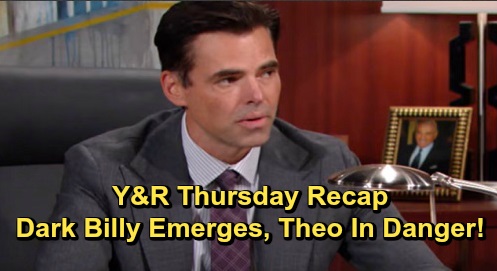 The Young and the Restless (Y&R) spoilers recap for Thursday, November 7, teases that Jack Abbott (Peter Bergman) will catch up with Nikki Newman (Melody Thomas Scott). At Society, they’ll discuss Nick Newman’s (Joshua Morrow) campaign and how they’ve been offering advice. Talk will turn to Theo Vanderway’s (Tyler Johnson) newfound connection to the Abbott clan. Jack will fret about balancing Kyle Abbott’s (Michael Mealor) feelings regarding Theo with his own desire to welcome Theo into the family.

At Newman Enterprises, Billy Abbott (Jason Thompson) and Victoria Newman (Amelia Heinle) will debate the fraudulent will. Victoria won’t think Cane Ashby (Daniel Goddard) should be held responsible, but Billy will still smell a con. After Victoria urges Billy not to get worked up about it, he’ll suggest that Victoria calms him and go in for a kiss.

A little later, Victoria will confide in Nikki. She’ll mention the will situation and how Billy’s let his frustration build up. Victoria will fear this is triggering something for Billy, so Nikki will push her daughter to trust her instincts. They’ll discuss how Billy tried to run down Adam Newman (Mark Grossman) and suffered a break from reality. Victoria will feel like Billy’s on the road to healing, but Nikki won’t seem as certain. She just won’t think Victoria should dismiss her concerns.

Other Young and the Restless spoilers say Theo will more career struggles. At Crimson Lights, he’ll chat up a possible client and grow disheartened when he’s turned down. Theo will look at his father’s pocket watch and note that nothing ever comes easy. Once he gets a call from Jack, Theo will act like he has to examine his schedule. He’ll eventually agree he’s got time to meet with his new uncle.

At Kyle and Lola Abbott’s (Sasha Calle) apartment, they’ll patch things up over their latest Theo dispute. However, Lola will think Kyle really owes Theo the apology. Kyle will point out that Theo came to town with an agenda and tried to make waves for them as a couple. Lola will just want Kyle to be open-minded when it comes to Theo. Unfortunately, Kyle will have his doubts about them turning a corner.

Back at Society, Jack and Theo will address the tension Kyle caused at the welcome get-together. Since all of this still feels unreal to Theo, Jack will think he can help with that. He’ll mention Theo’s grandfather, Stuart Brooks, but Theo will think he’s more like his grandmother.

Jack will laugh about all the stories he could tell Theo about Dina Mergeron (Marla Adams). Y&R spoilers say Jack will open up about Dina and why she left the family. He’ll also give Theo a file about his new relatives along with Eric Vanderway’s (Jon Briddell) adoption papers.

Afterward, Lola will spot Theo reading through the papers Jack gave him. Theo will point out that Kyle has an issue with him being around Lola, but Lola will shut down his concerns. She’ll insist she can make her own choices when it comes to the people she hangs out with. They’ll connect over their mutual respect for the hustle and how hard they’ve worked for everything in their lives.

Theo will praise Lola and get some advice in return. She’ll push Theo to show the Abbotts the real him. Once Theo gets back to his new reading material, he’ll notice info about the recent Jabot merger. At the office, Billy will back Kyle up when it comes to his Theo suspicions. Kyle won’t think Theo could’ve planned any of this, but Billy will remain wary of their new family member.

After Billy contends that Cane’s returning to his conning ways, he’ll argue that Kyle needs to get through to Jack. Billy will suggest that Theo can’t be trusted, but Kyle will view him as more of a nuisance than a threat. The Young and the Restless spoilers say Billy will disagree. Once he’s alone, he’ll pop a stick of gum and start chewing.

Billy’s alternate personality is back in action, so don’t miss the trouble ahead! We’ll give you updates as other Y&R news comes in. Stay tuned to the CBS soap and don’t forget to check CDL often for the latest Young and the Restless spoilers, updates and news.