The Young and the Restless Spoilers: Thursday, October 17 Review – Connor Feels The Love – Adrian Rosales Back On The Scene 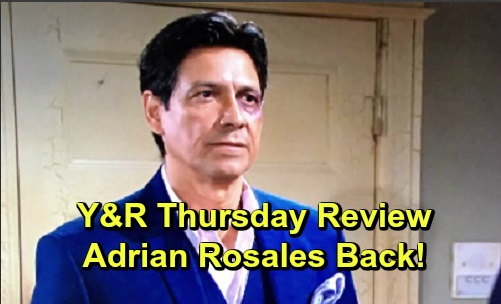 The Young and the Restless spoilers review for Thursday, October 17, tease that Chelsea Lawson (Melissa Claire Egan) will be feeling desperate over the situation with Connor Newman (Judah Mackey). She’ll still be upset over his fight at school, as well as her inability to get in touch with Adam Newman (Mark Grossman). She’ll lament to Nick Newman (Joshua Morrow) about everything, and Nick will offer reassurance that they can work through it together.

Nick and Chelsea will talk with Connor about the fight, and it will turn out that another kid was saying mean things about Adam, so Connor hit the kid. Nick will step in and explain about how it’s natural to feel like you want to take a swing at someone sometimes, but that it takes a real man to take a breath and walk away. Connor will seem to be receptive to the advice, but he’ll still want his dad – so much so that he swipes Chelsea’s phone and tries to call Adam.

But when he repeatedly gets Adam’s voicemail, he’ll cry, wondering how long it takes for a father to forget his kid. Nick and Chelsea will both comfort him and remind him about all of the people who love him. Later, they’ll get Christian Newman (Alex Wilson) and have a family game night. Both Connor and Christian will have a great time, and Chelsea and Nick will be thrilled that Connor has seemed to turn a corner.

Of course, having a good family night is great, but Connor will still have to go back to school and face the other kids who may taunt and tease him again. He’s probably not out of the woods yet, but it is great that he at least knows that there are people in his life who care about him…even if he can’t connect with his dad right now.

Meanwhile, on the new episode of Y&R on Thursday, October 17, Lola Abbott (Sasha Calle) will be shocked when her dad, Adrian Rosales (Jay Montalvo), shows up at the apartment. Adrian will be sporting a black eye, which he got courtesy of the husband of a woman he was pursuing. Lola will be disgusted by the whole thing and she’ll promptly ask her dad to leave, but he’ll talk her into letting him stay.

Kyle Abbott (Michael Mealor) will then arrive to find Adrian there with Lola. Lola will say that her father is probably about to ask for money and that they’re not going to give him any. Lola will be in the process of chewing him out when she starts to feel ill and leaves for the bathroom, Adrian will start to work Kyle, who will be well-aware that he’s being played, but still he’ll give Adrian a check and tell him not to hurt Lola again.

Later, Adrian will be at The Grand Phoenix sitting at the bar when Traci Abbott (Beth Maitland) arrives to get herself a drink. Adrian will sweet-talk her a bit, recognizing her from Kyle and Lola’s wedding, and he’ll offer to buy her drink, obviously using Kyle’s money to do so. They’ll talk a bit, and she’ll seem to be charmed by him, although it appears that Traci is just too smart to actually fall for a con artist like Adrian, but we’ll see what becomes of this.