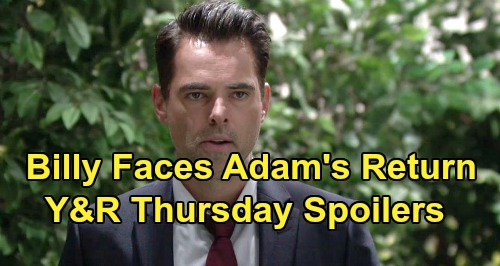 The Young and the Restless (Y&R) spoilers for Thursday, October 24, tease that Victoria Newman (Amelia Heinle) will battle concerns about Billy Abbott (Jason Thompson). When she gets updates on Adam Newman’s (Mark Grossman) return to town, Victoria won’t be sure how to break the news. She’ll worry about Billy sinking back into a dark place, but he’ll ultimately get filled in and offer reassurance.

Billy will promise Victoria that he genuinely worked through the worst of his anger. He’s probably always going to hate Adam, but he understands that level of rage wasn’t healthy. Billy was also given a second chance by Victor Newman (Eric Braeden). He was warned to use it wisely, so that’s exactly what Billy intends to do. With Victoria in his corner, Billy will think he can face anything.

Of course, Billy could still struggle with his inner demons. It’s one thing to say he’ll be fine, but can Billy really keep a grip on his fury? Time will tell, but Billy will focus on the Jabot war for now. The Young and the Restless spoilers state that another round of conflict is brewing. Kyle Abbott (Michael Mealor) will feel like Billy’s just waiting for him to fail.

When Billy doesn’t deny it, Summer Newman (Hunter King) will defend Kyle’s contributions. She’ll urge Billy to see what Kyle brings to the table. Billy may not listen to Summer, but Kyle will appreciate the support anyway. His gratitude won’t help as Summer fights her growing feelings.

Other Young and the Restless spoilers say Theo Vanderway (Tyler Johnson) will have his own goal in mind. He’ll approach Abby Newman (Melissa Ordway) once again and try to make small talk. Theo will turn on the charm, which he isn’t very good at to be honest. It always feels phony when Theo tries to be friendly – and that’s usually because he’s working some angle.

Nevertheless, Theo will break down a barrier with Abby. She’ll at least listen to him briefly, which is progress. However, Theo will blow that progress by bringing up Arturo Rosales (Jason Canela). Y&R fans know Arturo cheated on Abby, so it’s best to leave his name out of any conversation. Theo will be back at square one soon, but it’s doubtful he’ll give up.

At Elena’s urging, Devon will eventually summon Lily Ashby (Christel Khalil). He’ll hope that Lily can help him make the right call, so she’ll make a comeback before the week’s over. We’ll keep you posted as other Y&R details emerge. Stay tuned to the CBS soap and don’t forget to check CDL often for the latest Young and the Restless spoilers, updates and news.