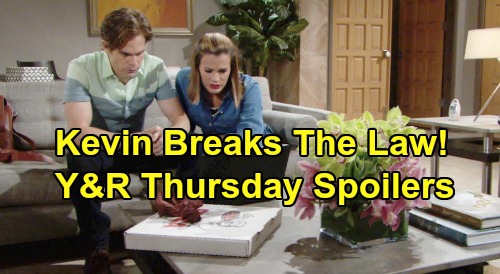 The Young and the Restless spoilers for Thursday, October 3, tease that Victoria Newman (Amelia Heinle) will have some fires to put out at Newman Enterprises. As Y&R viewers know, Victor Newman (Eric Braeden) and his children conspired to fake his death in order to get Adam Newman (Mark Grossman) to confess to tampering with Victor’s medication.

The move worked and Adam confessed to Victor, but it seems that nobody really thought through the consequences to the family business that would arise from the world believing that Victor had died.

On Thursday’s episode, Victoria will deal with the corporate fallout at Newman Enterprises. It will probably be quite stressful, and she may be met with backlash from the corporations that Newman does business with – after all, she’s the CEO and she was just very publicly accused of murdering her father.

Of course, Victoria has since been cleared of those charges, but still negative perceptions may remain and cause problems for the company. Victoria could be faced with losing contracts and business deals over the whole ordeal, especially if others in the business world think they can no longer trust the Newmans at their word.

Next on the new episode of Y&R on Thursday, October 3, Kevin Fisher (Greg Rikaart) will get an appealing offer. He recently got his old job back at the police station after making a big appeal to Paul Williams (Doug Davidson). Now, it seems that he’ll get an offer to do some side work – work that doesn’t exactly mesh with his new squeaky-clean image as a GCPD employee.

According to The Young and the Restless spoilers, Chelsea Lawson (Melissa Claire Egan) will want some assistance from Kevin with a very important task. She recently came into a large sum of money when her husband Calvin Boudreau (John Burke) died, but there was a hitch. The money isn’t clean, and when Calvin’s attorney presented her with the cash, he strongly suggested she launder it.

Chelsea will approach Kevin and want to use his expertise to launder her cash, and it looks like she’ll be willing to pay him handsomely to do it. Kevin may balk a bit at the offer, but we think there’s a good chance he’ll accept the assignment, especially when he realizes how much money is at stake and how much he’ll get paid. Besides, Kevin likes a challenge!