The Young and the Restless Spoilers: Tuesday, April 2 – Jack’s Bold New Plan to Save Jabot – Kyle and Summer Bond Over Teamwork

BY Heather Hughes on April 1, 2019 | Comments: one comment
Related : Soap Opera, Spoiler, Television, The Young and the Restless 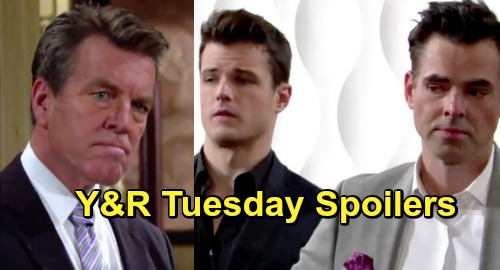 The Young and the Restless (Y&R) spoilers for Tuesday, April 2, tease that Jack Abbott (Peter Bergman) will face a serious Jabot crisis. After taking over the CEO spot on Monday, Jack will have some work to do. He’ll have to clean up the mess that Ashley Abbott (Eileen Davidson) and Kerry Johnson aka Dominique Caroll (Alice Hunter) made.

Since Jack will turn down Ashley’s takeover offer, she’ll walk away with all the products Dominique created during her time at Jabot. Ashley will once again leave Jabot reeling by taking all their patents.

However, The Young and the Restless spoilers say Jack won’t give up. He’ll call a meeting in Tuesday’s Y&R episode so the Abbotts can strategize and save the company from imminent disaster.

Since Jack and Billy Abbott (Jason Thompson) need all the help they can get, they’ll let Kyle Abbott (Michael Mealor) and his new bride pitch in. Summer Abbott (Hunter King) will actually prove quite beneficial to have around.

She’ll suggest some great social media tactics and Kyle will chime in with some as well. They’ll manage to create a solid strategy together, so that’ll strengthen their connection.

As for the Jabot vision in general, Jack will think they have to go big or go home. Ashley’s actions will leave them at a real disadvantage when it comes to cosmetics. They can’t sink all their efforts into that area anymore, so they’ll come up with some expansion ideas.

Jack will contend that they have to focus on apparel, too. They’ll need to market their brand across as many platforms as possible.

Meanwhile, Lauren Baldwin (Tracey E. Bregman) will feel like Fenmore’s is going to crash and burn. She’ll worry about how Jack’s plans will affect their stores, so she’ll want to get out of the contract they have with Jabot. Michael Baldwin (Michael LeBlanc) may weigh in with advice on how to pull it off.

Other Young and the Restless spoilers say Jett Slade (Gilbert Glenn Brown) and Ana Hamilton (Loren Lott) will grow closer through music. After Devon Hamilton (Bryton James) catches them playing together, he’ll think Jett has to get back in the R&B game. Devon will insist they have to do whatever it takes to make it happen. He’ll feel like the world still needs Jett’s performances.

It sounds like some terrific scenes are on the way. We’ll give you updates as other Y&R news comes in. Stay tuned to the CBS soap and don’t forget to check CDL often for the latest Young and the Restless spoilers, updates, and news.