The Young and the Restless Spoilers: Tuesday, August 6 – Summer’s Plus One Makes Trouble for Kyle – Bloody Adam Needs Sharon’s Care

BY Heather Hughes on August 5, 2019 | Comments: one comment
Related : Soap Opera, Spoiler, Television, The Young and the Restless 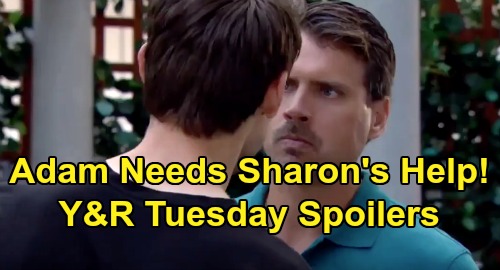 The Young and the Restless (Y&R) spoilers for Tuesday, August 6, tease that Theo Vanderway (Tyler Johnson) will mull over what he views as a phony change in Kyle Abbott (Michael Mealor). He feels like Kyle is just putting on a show for Lola Rosales’ (Sasha Calle) benefit. Theo believes Kyle is still the same guy he used to be deep down, so he’ll be quite interested in bringing out his true colors.

Of course, Theo knows something that could help Lola see the light – and it involves a mess that was cleaned up in New York. Kyle will continue to warn Theo about keeping his mouth shut. He’ll worry that everything’s going to blow up, so it’s wise to keep some distance between them. That’s one reason Theo won’t be invited to Kyle’s bachelor party.

Kyle already told Theo he was dead to him anyway, so Theo really shouldn’t be expecting an invitation. Even so, Summer Newman (Hunter King) will offer one. She’ll ask Theo to attend the bash as her plus one since this will serve as Lola’s bachelorette party, too.

Lola will want her lifesaving liver donor there, but Kyle will immediately turn Theo away. He’ll push his former buddy to get lost, but Lola will feel like this should be a time of fun and love. She won’t like the idea of Kyle and Theo being at odds. The Young and the Restless spoilers say Lola will push Kyle to relax and just let Theo enjoy the party.

Christian Newman will be at the center of this war as usual. Sharon will be over all the brother battling, so she’ll send Nick away and focus on patching Adam up. At the penthouse, Adam will show more of that damaged, vulnerable soul that Sharon loves so much. She won’t be able to resist hitting the sheets with her old flame.

Sharon and Adam will be on fire with desire. The Young and the Restless spoilers say it won’t be long until they’re reveling in the afterglow of their reconnection. Nevertheless, Sharon will have a party to get to soon. She’ll be attending that bachelorette-bachelor bash we mentioned, which Rey Rosales (Jordi Vilasuso) will be at as well. Y&R fans can expect awkwardness between them later this week!

It sounds like some great scenes are coming up. We’ll give you updates as other Y&R news emerges. Stick with the CBS soap and don’t forget to check CDL often for the latest Young and the Restless spoilers, updates and news.