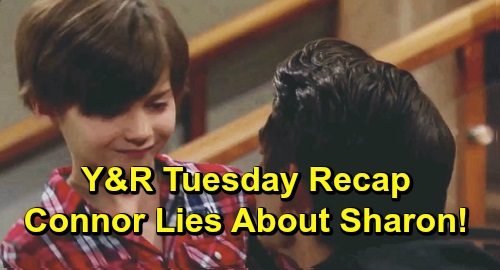 The Young and the Restless (Y&R) spoilers recap for Tuesday, December 10, teases that Victoria Newman’s (Amelia Heinle) surprise won’t go over as well as she hoped. At Society, Victoria will fill Billy Abbott (Jason Thompson) in on her plan for a Christmas getaway. Billy will suggest he would’ve preferred the beach over Telluride. He’ll think they should spend the holiday in Genoa City and jet off on December 27 instead. Since they won’t be on the same page, Victoria will suggest tabling the discussion.

At Adam Newman’s (Mark Grossman) penthouse, Connor Newman (Judah Mackey) will happily play cards with Adam and Chelsea Lawson (Melissa Claire Egan). He’ll be annoyed when he’s forced to stop the fun and meet with Sharon Newman (Sharon Case). Connor will insist he told Sharon not to come anymore. He’ll want to know why she’s there, so Sharon will ask if Connor’s having a bad day. Connor will snap that it was great until Sharon showed up.

After Sharon deals some cards, Connor will hurl them onto the floor. Y&R spoilers say Adam will come downstairs to see the aftermath. He’ll offer Sharon his gratitude before she heads out. That’ll leave Connor to lie about Sharon saying mean things to him. He’ll claim Sharon said she was going to have him sent away and that nobody could stop the monster from returning.

At the coffeehouse, Sharon will talk to Rey Rosales (Jordi Vilasuso) about Connor’s growing issues. She’ll feel like Connor doesn’t trust her anymore. When Adam arrives, he’ll mention the dark road Connor’s on and share what his son told him about Sharon. Adam knew Connor was making it all up. He’ll seek advice from Sharon, who’ll think they need to make it clear to Connor that lying and manipulating aren’t acceptable.

Once Adam’s gone, Sharon will once again worry about Connor and if she’ll be able to help him. Rey will think Sharon is Connor’s best shot at getting it, especially considering his parents are Adam and Chelsea. At the ranch, Nick Newman (Joshua Morrow) will thank Victor Newman (Eric Braeden) and Nikki Newman (Melody Thomas Scott) for babysitting Christian Newman (Alex Wilson). This will give Nick a much-needed date night with Chelsea.

Victor will bring up Nick’s political career, which Chelsea tanked. He’ll irritate Nick by suggesting the two people Nick sacrificed his campaign for have moved in with Adam. After Victor leaves the room, Nikki will echo his concerns about Chelsea. She’ll gripe to Nick about Chelsea’s choices and how hard it is to trust her.

Later, Nikki and Victor will discuss Chelsea and Nick not being right for each other. As for Victor, Nikki will like the new-and-improved version. She’ll also be happy that Billy’s been taking steps toward fixing his problems. Over with Chelsea, she’ll let Nick know she can’t spend the night at his place. However, Chelsea will be eager to enjoy an evening complete with dinner and wine.

After arriving at Society, Nick and Chelsea will spot Victoria by herself. She’ll mention that Billy left not too long ago. Once Chelsea and Nick take seats at their own table, they’ll wind up bickering about Adam. Nick will insist this living situation isn’t normal. Is Chelsea going to live with her ex-husband until Connor goes off to college? Nick will feel like Chelsea’s handing Adam everything he wants.

Chelsea will once again argue that Connor is the priority. Once Nick settles down a bit, he’ll think they should try to make the best of their evening together. Unfortunately, Chelsea will get a text from Adam and have to head back to the penthouse. The Young and the Restless spoilers say Nick will be frustrated over their derailed plans.

After Chelsea apologizes and heads for the door, Victoria will join Nick and offer a warning. She’ll contend that Chelsea is either with Nick or Adam. Victoria won’t think Chelsea can have it both ways. Talk will turn to Billy bailing on his evening with Victoria, too. She’ll be concerned about how Billy’s handling his decision to leave Jabot.

At Billy’s favorite dive bar, he’ll be glad for some relief. Billy will enjoy not having to answer to anyone in his little place of refuge. He’ll text Victoria an apology for earlier and suggest their getaway is on. Billy will decide to join in a poker game soon after, but gambling again won’t make him feel any better. At home later, Billy will fib about his workout going well and approve of Victoria’s plan to shower together.

Back at the ranch, Nikki will contemplate having a chat with Chelsea, but Victor will remind her it’s not a good idea to interfere. After Nick returns, he’ll inform Nikki that he knows what he has to do now. At the penthouse again, Chelsea will assure Adam that she’ll stay there for Connor’s sake. They’ll agree Connor’s only shown signs of improvement when they’re supporting him together.

Adam will bring up Sharon and suggest they have to make Connor understand that they can’t be manipulated. The Young and the Restless spoilers say danger could be brewing for Sharon eventually, so don’t miss what Connor has in store. We’ll give you updates as other Y&R news comes in. Stay tuned to the CBS soap and don’t forget to check CDL often for the latest Young and the Restless spoilers, updates and news.