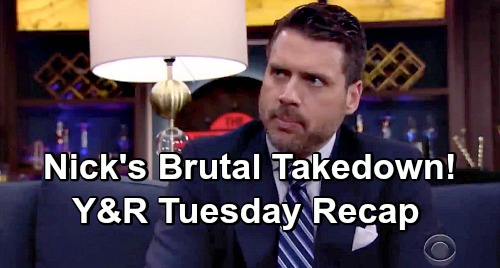 The Young and the Restless (Y&R) spoilers update and recap for Tuesday, February 5, tease that Summer Newman (Hunter King) will continue to pine for Kyle Abbott (Michael Mealor). At Jabot, Summer will pop in and explain her troubles to her mom. Phyllis Summers (Gina Tognoni) will learn that Summer pushed Kyle away until she realized what she really wanted. By then, Lola Rosales (Sasha Calle) was in the picture.

Phyllis will hear about Summer’s recent date with Fenmore “Fen” Baldwin (Zach Tinker) as well. She’ll offer herself as some company for her daughter, so they’ll make plans. However, Summer will also want to talk about Phyllis’ relationship with Billy Abbott (Jason Thompson). She’ll hate that she messed things up between them, but Phyllis will offer reassurance and change the subject.

At the coffeehouse, Mariah Copeland (Camryn Grimes) will be hopeful about Tessa Porter’s (Cait Fairbanks) job interview at Lola’s restaurant. Kyle will suggest that Tessa’s got this in the bag. Talk will turn to the distance Kyle’s been feeling with Lola. He’ll feel like Lola’s cooking comes first, but Mariah will hint that maybe Summer’s return has something to do with this.

Y&R spoilers say Mariah will offer Kyle a warning. She’ll contend that it’s not a good idea to give Summer any attention. Mariah will also fear Kyle let it slip that Lola was a virgin. He’ll promise that he didn’t, but he’ll confess that he wishes he could have that part of their relationship.

Nevertheless, Kyle will assure Mariah that he’s willing to wait. She’ll just hope he can avoid Summer and concentrate on Lola. Of course, that plan obviously won’t work out since Summer’s so relentless! Over with Tessa, she’ll pull off a great interview with Lola and Abby Newman (Melissa Ordway). Tessa will have some solid answers until one question catches her off guard.

Abby will want to know why Tessa left her barista job at Crimson Lights. Clearly, “I blackmailed my boss over a murder cover-up and got fired” isn’t going to fly! Instead, Tessa will insist that she wanted to pursue other opportunities. That’s technically true since around Sharon Newman (Sharon Case) is the last place she wants to be. Sharon has agreed to be civil, but things are still pretty awkward.

Tessa will catch up with Mariah later and fret about Abby possibly calling Sharon. She’ll worry it’ll tank her chances, but Mariah will decide to help out. She’ll track Abby and Lola down to insist that Sharon is simply overprotective. They’ll let Mariah know Tessa got the job, so The Young and the Restless spoilers say Mariah will thrill Tessa with the fantastic news.

While Lola complains to Abby about Summer, the meddler herself will needle Kyle. Summer will swipe Kyle’s laptop briefly to take a look at his modeling pics. She’ll also grab his phone and notice that there aren’t any recent texts from Lola. Summer will assume she’s getting in the way, but Kyle will insist that his focus is on his girlfriend. He’ll contend that Lola’s simply been caught up with restaurant prep.

Summer will argue that Kyle’s holding back, so she’ll be waiting if he wants to make any confessions. At Nick Newman’s (Joshua Morrow) place, he’ll show Michael Baldwin (Christian LeBlanc) some of the surveillance equipment that was found at the ranch. They’ll talk about having it examined for fingerprints and the possibility that an alive J.T. Hellstrom (Thad Luckinbill) is behind this.

Regardless, Nick will want to stop this threat to his family. Phyllis will get updates later and grow concerned about J.T.’s potential revenge mission. Soon after, a call from Michael will bring disappointment. There was no DNA found on the equipment, but Nick won’t give up. He’ll insist he’s going to do whatever it takes to take the person responsible down.