BY Heather Hughes on January 12, 2019 | Comments: one comment
Related : Soap Opera, Spoiler, Television, The Young and the Restless 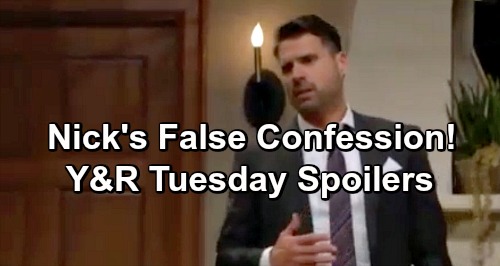 The Young and the Restless (Y&R) spoilers for Tuesday, January 15, tease that Victor Newman (Eric Braeden) will get another visitor in lockup. It looks like it’ll be Nick Newman (Joshua Morrow), who now knows Nikki Newman (Melody Thomas Scott) is J.T. Hellstrom’s (Thad Luckinbill) killer. This is certainly a twist Nick never saw coming.

After Nikki explains herself on Monday, it’ll leave Nick on a mission. He’ll want to protect his mom AND clear his dad’s name, which sounds awfully tricky. Of course, Nikki’s health and safety will be Nick’s priority. That’s why he’ll want to speak with Victor and let him know where things stand.

Tuesday’s episode will bring Victor’s push for peace, so it seems he’ll want an official truce with Nick. They can’t have old grudges getting in their way right now. Victor and Nick have at least one thing in common.

They both love their family members and would do just about anything to protect them. This father and son will come together over that, but there’ll be a problem.

Nick will realize the cops could be monitoring this visit, so he won’t want to come right out and say that he knows Nikki’s the killer. He’ll basically just suggest that he knows what Victor knows and dismiss the idea of Victor taking the fall. Nikki is a nervous wreck over the threat that’s tormenting her. She also feels terrible about Victor suffering because of her.

Nick will think Victor needs to be home with Nikki, but Victor will believe he needs to sit tight and beat these charges. He’ll think it’s the only way to make Nikki’s issues disappear.

The Young and the Restless spoilers say Nick won’t be on board with that plan. He’ll decide something drastic must be done, even if he has to go rogue. It sounds like Nick will prepare to make his own false confession!

Meanwhile, Devon Hamilton (Bryton James) will engage in some risky business. He’ll hope his gamble is worth it, so this might be about signing the mysterious songwriter he wants.