The Young and the Restless Spoilers: Tuesday, January 15 Update – Nikki and Victoria Get Spied On – Kerry’s Shady Side Exposed 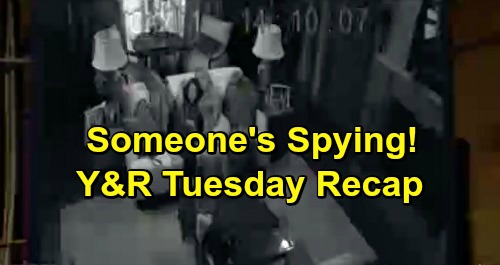 The Young and the Restless (Y&R) spoilers for Tuesday, January 15, tease that Ana Hamilton (Loren Lott) will get some great news. After Devon Hamilton (Bryton James) lets her hear Fenmore’s “Fen” Baldwin’s newly released track, Ana will be excited that he picked her version. Devon will confess that it was the better one and suggest that he still wants to sign the songwriter behind it.

Ana will stay tight-lipped about being the pen behind this hit. Across town, Michael Baldwin (Christian LeBlanc) and Lauren Baldwin (Tracey E. Bregman) will congratulate an excited Fen. Although Michael wasn’t thrilled about his son’s decision to bail on law school, he’ll admit he’s proud of what he’s accomplished. He’ll think Fen made the right call by following his dream.

Later, Devon will celebrate with Fen and Ana. He’ll just wish the songwriter Ana knows was willing to come forward and share this with them. Once they’re alone, Fen will push Ana to just come clean. He won’t see what the big deal is, but Ana will insist she has her reasons. She’ll snap that Fen is going to ruin everything if he doesn’t stop.

At the police station, Nick Newman (Joshua Morrow) will visit his father again. He’ll tell Victor Newman (Eric Braeden) that he believes he’s innocent and wants to find a better plan. Nick will bring Michael in to serve as Victor’s attorney, but Vic won’t want him. They’ll argue, but Nick will feel like Victor needs to accept the help and hopefully get back home to Nikki Newman (Melody Thomas Scott).

Nick will bring up the threat their family is facing and push Victor to take the lawyer he’s provided. Nikki could really use Victor’s support. The Young and the Restless spoilers say Victor will soften a bit and let Nick know it’s all going to work out. He’ll be pleased over the way his son’s stepping up.

Over with Victoria Newman (Amelia Heinle), she’ll be taken aback when Nikki shows her the fireplace poker. Victoria will protest that it’s at the bottom of the lake, but Nikki will point out that’s obviously not the case anymore. She’ll confess that she told Nick about killing J.T. Hellstrom (Thad Luckinbill), which will leave Victoria agitated. Nick could go to the cops and blow this for them.

Nikki will mention that she left Sharon Newman (Sharon Case) and Phyllis Summers (Gina Tognoni) out of it. She won’t think Nick is going to blab, but she’ll admit there’s another problem. Who knew about the fireplace poker and taunted them with it? Nikki will suggest that someone knows too much, even if it’s a copy of the original. She’ll vow to find out who’s responsible and why it’s happening.

At an undisclosed location, someone will watch Victoria and Nikki’s chat through a secret video feed. Over with Kerry Johnson (Alice Hunter), she’ll have a gift for Jack Abbott (Peter Bergman). She’ll let him sniff a scent she’s formulated just for him: Jack of Hearts.

Y&R spoilers say Jack will give his approval and push for a trip upstairs to make love. He’ll ultimately catch Kerry trying to sneak out instead. Kerry will cover up and suggest that she can make it up to Jack. She’ll send Jack up and promise to be along right after him, but she’ll look suspicious as she ponders the Jack of Hearts vial.