BY Heather Hughes on January 28, 2019 | Comments: one comment
Related : Soap Opera, Spoiler, Television, The Young and the Restless 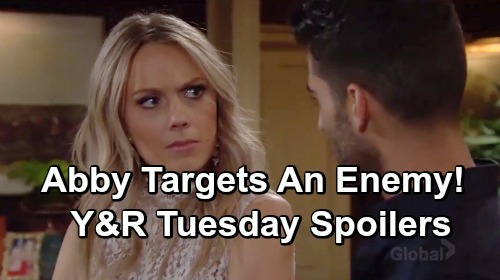 The Young and the Restless (Y&R) spoilers for Tuesday, January 29, tease that Summer Newman (Hunter King) will fly back into town – presumably on her broom. She can certainly be a bit of a wicked witch when she’s determined to get what she wants. Unfortunately, that could mean bad news for Kyle Abbott’s (Michael Mealor) romance with Lola Rosales (Sasha Calle).

Kyle spent quite a while pining for Summer, but she shut him down one too many times. If Summer was playing hard to get, it backfired spectacularly. Now Summer truly wants a future with Kyle, but he’s all in on his relationship with Lola. Of course, that could change. Summer will hope to make sure of it with her latest trip to Genoa City.

The Young and the Restless spoilers say Kyle will wonder what Summer’s up to. He’ll have suspicions about her return to town, but Summer will insist it’s just a friendly visit. She’ll play the role of mature business executive as she tries to reel Kyle in.

However, Y&R fans know Summer better than that. She wouldn’t have come back without an agenda! The Young and the Restless spoilers state that Summer’s goal will be winning Kyle over. That’s the real reason Summer dropped everything and came home to stir the pot.

While Summer plots her first big move, Abby Newman (Melissa Ordway) will plot a big move of her own. She’ll realize she needs to tighten her grip on an enemy. We can probably assume that’s Mia Rosales (Noemi Gonzalez). Mia is clearly Abby’s worst adversary at the moment, so this fierce Newman will decide to keep her close. She won’t want Mia causing any drama behind her back.

Other Young and the Restless spoilers say Nick Newman (Joshua Morrow) and Sharon Newman (Sharon Case) will rehash the past. They’ll reopen some wounds as they consider all the secrets and lies between them. Sharon will feel like Nick’s being excessively hard on her. She won’t think it’s fair when this cover-up chaos was a team effort.

Nick will think it’s reasonable since they were engaged and almost married. Sharon blew up at him for his lies, but she was lying, too. The situations were very different, but it’ll still be hard for Nick to get past the broken trust. He isn’t blameless either, but the connection he thought he had with Sharon has taken at hit.

It sounds like Nick and Sharon have some serious issues to work through. We’ll give you updates as other Y&R details emerge. Stay tuned to the CBS soap and don’t forget to check CDL often for the latest Young and the Restless spoilers, updates, and news.