BY Heather Hughes on July 1, 2019 | Comments: one comment
Related : Soap Opera, Spoiler, Television, The Young and the Restless 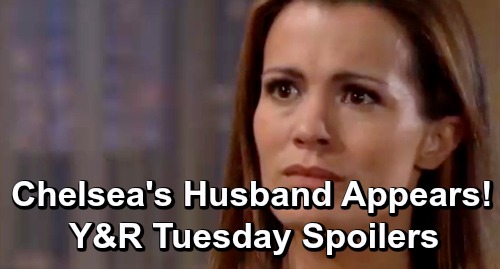 The Young and the Restless (Y&R) spoilers for Tuesday, July 2, tease that Adam Newman (Mark Grossman) will face an unexpected arrival. Someone will surprise him by dropping by, so there are a couple of options to consider. We know Phyllis Summers (Michelle Stafford) will end up at Adam’s penthouse at some point this week. She’ll enjoy some Champagne with Adam as they toast to being outcasts.

Phyllis might be Tuesday’s popup guest, but there’ll also be somebody new lurking in Genoa City. The Young and the Restless spoilers say Chelsea’s husband will make his first appearance. John Burke will debut as Calvin Boudreau, so he might pay Adam a visit. It’s easy to imagine Calvin telling Adam to back off and leave his family alone.

Of course, Adam would likely make it clear that’s HIS family, not Calvin’s. It’s worth mentioning that Calvin will have some sort of medical crisis while he’s in town and Y&R spoilers indicate he will die. Will a fight with Adam spark a heart attack? Calvin may get too worked up for his own good! Regardless, Adam’s got a busy week ahead of him and will have to do plenty of strategizing.

Other Young and the Restless spoilers say Kyle Abbott (Michael Mealor) will get a bit nervous. As he prepares to meet Celeste Rosales (Eva LaRue), Kyle will just want to make a nice first impression. He’ll realize this is a big deal since this engagement happened so fast. Kyle also happens to be Lola’s first serious love, so he’ll want to show her mom this is real and what they both want.

There’s also that recent marriage to Summer Newman (Hunter King) to fret about! However, Kyle only went through with it to secure a liver donation for Lola. He managed to win Rey Rosales (Jordi Vilasuso) over for the most part, so he should be able to win Celeste over, too.

Even so, Y&R fans can expect some wedding planning drama soon. Celeste will hijack “Kola’s” special day with some crazy ideas of her own, so things could head south quickly. We’ll give you updates as other Y&R news comes in. Stay tuned to the CBS soap and don’t forget to check CDL often for the latest Young and the Restless spoilers, updates and news.