BY hellodrdavis on July 22, 2019 | Comments: one comment
Related : Soap Opera, Spoiler, Television, The Young and the Restless 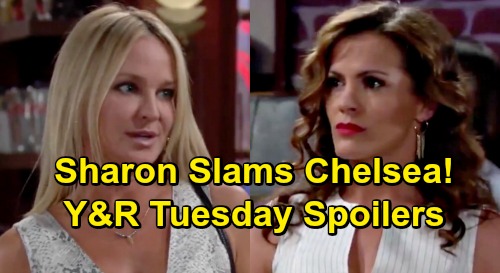 The Young and the Restless (Y&R) spoilers for Tuesday, July 23, tease that Nick Newman (Joshua Morrow) will be furious with Adam Newman (Mark Grossman). He’ll have just sat by helplessly while the judge in custody case watched the video of himself impersonating JT Hellstrom (Thad Luckinbill). Adam will have finagled it so that Kevin Fisher (Greg Rikaart) sent the video to his lawyer in the middle of the custody hearing.

Of course, the video won’t bode well for Nick in the custody case. Nick previously made a big deal about how Adam engaged in criminal activities while portraying himself as a loving father and law-abiding citizen. The Young and the Restless spoilers say the video may make Nick look pretty bad in the judge’s eyes – like someone who vindictively tried to terrorize his own father.

On Tuesday’s episode, look for the custody hearing to continue and for Adam and his lawyer to make hay out of the video and use it to portray Nick in the worst light possible. Hopefully, Nick won’t lose his cool too badly and make his situation even worse.

Meanwhile, on the new episode of Y&R on Tuesday, July 23, Summer Newman (Hunter King) will see a new side to Theo Vanderway (Tyler Johnson). She and Theo have been enjoying their summer together, having fun and generally enjoying each other’s company. Summer has been seeing Theo ever since she got dumped by Kyle Abbott (Michael Mealor) so that he could reunite with Lola Rosales (Sasha Calle).

Summer has been all about the partying and carefree lifestyle since she and Kyle split, and she’s been particularly critical of Kyle and Lola’s “boring” and settled-down lifestyle. So far, Theo has suited her needs just fine and she hasn’t found herself getting too attached to him, but perhaps she’ll see something new in him that will make her start falling for him for real. If so, she could be setting herself up for a real heartbreak!

Finally, Sharon Newman (Sharon Case) will get an unpleasant surprise when she encounters Chelsea Lawson (Melissa Claire Egan) at Crimson Lights. The two ladies will clash as Sharon won’t be able to help but remark on how Chelsea has “returned to the scene of the crime,” referring to when Chelsea hit Sharon over the head in the establishment. Don’t look for Sharon to forgive and forget anytime soon!