BY Heather Hughes on May 13, 2019 | Comments: one comment
Related : Soap Opera, Spoiler, Television, The Young and the Restless 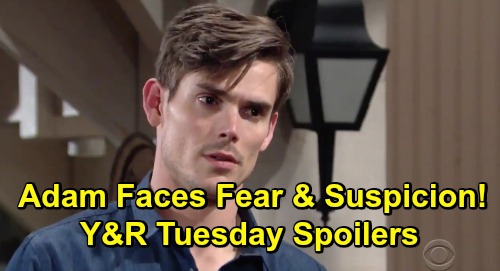 The Young and the Restless (Y&R) spoilers for Tuesday, May 14, tease that Victor Newman (Eric Braeden) will work hard to bring his son back. On Monday, Sharon Newman (Sharon Case) does her part by convincing Adam Newman (Mark Grossman) to return home. However, Victor will want more than just the physical here. He’s desperate to jog Adam’s memory and get his mind back, too.

Y&R fans can expect a new plan to emerge on Tuesday. Victor may hope that the familiar sights and sounds of Genoa City will trigger something. It looks like Adam will stay at the tack house, but he’ll spend some time at Sharon’s place, too. The Young and the Restless spoilers say Adam will also make an appearance at Newman Enterprises, so he’ll be hitting a lot of the usual hot spots.

Victor might count on these locations to bring something back for Adam. He’s willing to try anything at this point. Of course, Adam will also interact with some faces that were familiar to him once upon a time. The Young and the Restless spoilers state that Adam will reunite with his siblings sooner or later. You can bet that’ll bring some tension, especially when Nick and Adam come face to face.

Adam will undoubtedly want to see Christian Newman (Jude and Ozzy McGuigen), but Nick will be awfully protective of the boy. There’ll be conflict right off the bat between these brothers, which should bring some great drama. Nick may drop some hints or even flat-out accuse Adam of faking his memory loss. He’ll look deep in Adam’s eyes and try to figure out if this is real or just some con job on his family.

Victoria Newman (Amelia Heinle) may take a softer approach – at least to Adam’s face. She’ll still be worried about the trouble Adam could bring, but she may let him know she’s glad he’s alive. That’s the least Victoria can do! As for Abby Newman (Melissa Ordway), let’s just hope they’ll remember she’s a Newman eventually.

Nikki Newman (Melody Thomas Scott) knows how much Adam’s return means to Victor. He was a broken man after Adam’s death, especially since he set off the chain reaction that caused it. Nikki will be happy Victor’s got this chance to make things right, but she may secretly fear it’ll backfire.