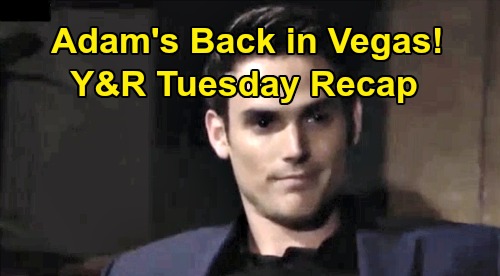 The Young and the Restless spoilers recap for Tuesday, October 1, tease that Chelsea Lawson (Melissa Claire Egan) will continue to rant at Nick Newman (Joshua Morrow). She’ll be upset that Connor Newman (Judah Mackey) got hurt by the Newman family’s plan to fake Victor Newman’s (Eric Braeden) death. Meanwhile, Victor will reveal himself to a stunned Michael Baldwin (Christian LeBlanc), who will quickly figure out the reasoning behind Victor’s ruse – to smoke out Adam Newman (Mark Grossman).

At The Grand Phoenix, Phyllis Summers (Michelle Stafford) will support Summer Newman (Hunter King) as she continues to struggle with her grandfather’s death, as Nick tries unsuccessfully to reach Summer by phone. Later, Victor’s family (minus Summer) will gather at the ranch along with Paul Williams (Doug Davidson), who was in on the ruse also. Paul will relay that the pharmacist is now saying that Adam is the one who got her to double Victor’s meds.

Victor will then announce that Adam came to the ranch, apologized for tampering with his meds, and claimed to be leaving town. Victor will say that he let Adam go, and that he got what he wanted from the ruse…meaning that he saw a change in Adam. That will upset Paul, since Paul wanted to see justice done in the matter. Victor will say that if Paul pursues Adam, then he won’t cooperate.

Back at The Grand Phoenix, Phyllis, Summer, and Chelsea will watch a televised press conference in which Michael announces that charges against Victoria Newman (Amelia Heinle) have been dropped because there was no murder. Summer will be shocked to see Victor standing next to Michael at the conference and she’ll sob as she realizes that she was duped by a ruse. Phyllis will be furious, and she and Summer will head to the ranch.

Summer will be glad to see Victor alive and well, and Nick will attempt to explain that he tried to reach her before the press conference took place. Phyllis will then barge in and blast the Newmans for putting Summer through all of this. She’ll say that she’s sickened by them, and she’ll soon realize that the reason they didn’t tell Summer about the ruse was to keep her from finding out. Summer will be devastated that her family let her grieve.

Later, Paul will fill in Rey Rosales (Jordi Vilasuso) and Sharon Newman (Sharon Case) about being in on the ruse, neither of which will be happy about the situation, and Rey will be especially irked that Victor let Adam get away. Sharon will confirm with Nick by phone, and she’ll be irked in her own right that Faith Newman (Alivia Alyn Lind) was led to believe Victor had died. Finally, Adam will be shown playing poker in Las Vegas, assuming his “Spider” identity once again.

Meanwhile, on the new episode of Y&R on Tuesday, October 1, Devon Hamilton (Bryton James) will be in utter disbelief that Cane Ashby (Daniel Goddard) is the named beneficiary in the alleged will that Amanda Sinclair’s (Mishael Morgan) produced. Everyone in the room will be shocked, and Brittany Hodges (Lauren Woodland) will take a look at the document and notice that it’s a photocopy.

Amanda will confidently assure her that she’ll have the originals soon, but Brittany will want an expert to examine the document for authenticity. Devon will tell Amanda to think long and hard about pursuing this matter, but Amanda will be unfazed. Brittany will think that the whole thing seems bogus, since Cane isn’t a blood relative of Katherine Chancellor’s (Jeanne Cooper). Devon will then lash out at Cane and accuse him of masterminding this whole thing.

But Cane will firmly state that he’s not behind this, and that he’d never abuse Katherine’s legacy. Devon will end up apologizing to Cane, and Cane will promise to find Chance Chancellor (John Driscoll) and hopefully clear this matter up.