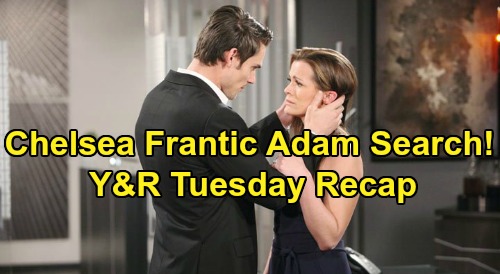 Chelsea will believe she’s failed Connor as a mom, but Summer Newman (Hunter King) will show up and offer reassurance. She won’t think Chelsea’s to blame for the drama Connor’s dealing with. After Chelsea exits, Summer will talk to Nick about her own issues. Since Phyllis Summers (Michelle Stafford) is MIA again and Summer’s been sparring with Theo Vanderway (Tyler Johnson), she’ll only feel needed at Jabot these days.

Fortunately, Phyllis will indeed resurface in Genoa City, but her mind will still be on what’s up in Vegas. She’ll make phone calls in hopes of finding Cane Ashby (Daniel Goddard) and getting some updates, but she won’t have any luck. Phyllis will only learn Cane doesn’t have a flight plan, so she’ll be left wondering what’s going on.

At Kyle Abbott (Michael Mealor) and Lola Abbott’s (Sasha Calle) apartment, they’ll discuss Lola’s new nephew, Mateo. After looking at a pic of the baby, they’ll consider what their own child would look like. An app will offer a rather unattractive prediction, so they’ll get a good laugh out of it. Soon after, they’ll address how they have things to accomplish before having kids.

Next, Kyle will gripe about his Jabot problems and argue that Lola doesn’t understand what it’s like. He’ll suggest Lola’s never had to prove herself to her family like he and Summer have. Afterward, the topic of Theo will come up. When Lola mentions Theo passing out in the kitchen, Kyle will be upset that she kept it from him. He’ll insist that Theo’s manipulative, so Lola will ask if Kyle trusts her.

Kyle will contend that it’s Theo he doesn’t trust. As their voices raise, Lola will fire back that she’s not naïve. She’ll think Theo genuinely wants to make things right, but Kyle will yell that she should stay away from him and stomp off.

At Devon Hamilton’s (Bryton James) penthouse, he’ll mention a shocker about Tucker McCall (Stephen Nichols). Devon will fill Elena Dawson (Brytni Sarpy) in on what he learned from Tucker’s assistant. It turns out Tucker’s been on a spiritual journey and is worried about the harm technology can do. Devon will fret about Tucker’s company being in meltdown mode, but Elena will have a surprise to help him relax.

Before Devon gets that surprise, he’ll visit Crimson Lights and deliver big news to Nick. Devon will insist on doubling his New Hope investment, and he’ll add that the will can’t be legally challenged. Once Nikki Newman (Melody Thomas Scott) and Sharon Newman (Sharon Case) walk over, Sharon will once again mention how she’d vote for Nick. There’ll be more talk about Nick potentially running for office, but he’ll get a call from Chelsea and have to head home.

Other Young and the Restless spoilers say Sharon will find Phyllis on the patio and deny interest in what she’s plotting. Phyllis will bring up Adam Newman’s (Mark Grossman) name and try to get a reaction out of Sharon. However, Sharon won’t take the bait. She’ll note that Adam’s departure didn’t affect her, but she’ll think Phyllis must feel abandoned by her pariah pal.

Phyllis will get irritated over the abandonment comment and snarl that she just saw Adam. Meanwhile, Connor will have another outburst at home. He’ll shout about Nick not being his real father and once again call Chelsea a liar. Connor will eventually cry about wanting his dad, so Chelsea will take action.

After Sharon gets a call about Chelsea’s search for Adam, she’ll note that she knows someone who can get in touch. Later, Y&R spoilers say Sharon will revisit her earlier chat. She’ll ask why Phyllis didn’t just stay in Vegas, but Phyllis will counter that she’s not through with GC. Sharon will wonder if Adam feels differently.

In Vegas, Adam will notice Chelsea’s number calling. He’ll let it go to voicemail, so Chelsea will leave a message about Connor needing him. Adam will skip checking it and call Riza Thompson instead. He’ll assure Riza that he’s ready to get back in the game. Adam will point out that there’s nothing left for him in Genoa City now.

In a suite at the Grand Phoenix, Elena will mention a jazz festival that Devon wanted to attend. Since he missed it, Elena will have a recording of the whole thing. They’ll share a kiss as Devon appreciates the sweet gesture. At Jabot, Theo will approach Summer and try to apologize for his ego. She’ll put up a fight, but he’ll concede that he goes too far sometimes and wants to do better.