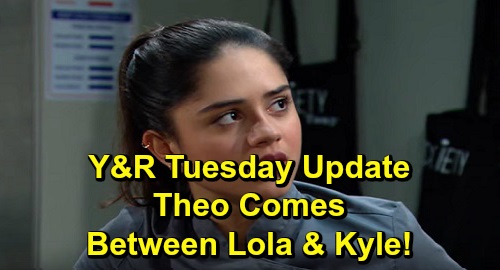 The Young and the Restless spoilers review for Tuesday, October 15, tease that Nick Newman (Joshua Morrow) and Chelsea Lawson (Melissa Claire Egan) will try to get a grip on the problems that Connor Newman (Judah Mackey) is having. As it turns out, Connor will have told them that he broke a lamp in his room by accident, which Nick and Chelsea will hope is true. But they’ll both suspect that he may have broken the lamp in frustration over his father’s departure and the other Newman family drama.

Unfortunately, things will take an even worse turn when Chelsea gets a call from Connor’s school. Connor will have started a fight at school and picked on another kid. Chelsea and Nick will both sit down with Connor, who won’t appreciate Nick questioning him about the incident. Connor will tell Nick that he doesn’t have to listen, since Nick isn’t his father. This will devolve into Connor calling Chelsea a liar, then finally Connor will start crying and saying that he wants his dad.

This will prompt Chelsea to call Adam Newman (Mark Grossman), who will still be in Las Vegas. He’ll see the incoming call from Chelsea, but he won’t answer it or listen to the message. Instead, he’ll call Riza Thompson (Tina Casciani) and ask her to get him back into the action. In the course of their conversation, he’ll comment that there’s nothing for him back home, which is a sad statement given that his son needs him more than ever.

Next, on the new episode of Y&R on Tuesday, October 15, Kyle Abbott (Michael Mealor) and Lola Abbott (Sasha Calle) will have their first big spat since their wedding. Their morning will start out nice enough, with a look at photos of their new nephew from Miami. They’ll also talk about what’s going on at Jabot, with Kyle seemingly getting in a dig by saying that Lola doesn’t know what it’s like to feel like you have to repeatedly prove yourself to your family the way that he and Summer Newman (Hunter King) do.

Later, Kyle will be brooding, and it will turn out that he’s thinking about the day that Theo Vanderway (Tyler Johnson) was at Society with Lola. Kyle will remember that Theo was half-wasted and made some remark like “it was good getting to know you better, especially your evil side.” Kyle will want to know what Theo meant by that, and Lola will proceed to explain about Theo’s fainting spell and how she subsequently teased him over it.

Kyle will get instantly angry upon hearing about this, especially about the fact that he was only hearing about it now. Kyle will insist that Theo was working her, and that he’s never been squeamish before. Lola will insist that it’s not a big deal, but Kyle will blow up over the whole thing, saying that Theo is a master manipulator. Lola will infer that Kyle thinks she’s gullible and that perhaps he doesn’t trust her.

Then things will get pretty heated, with Kyle raising his voice and yelling that it’s Theo he doesn’t trust, and that Lola might think she pranked Theo, but really Theo pranked her. She’ll fire back that she’s not naive and that she has street smarts, but Kyle will yell that she needs to stay away from Theo before he storms out.

Of course, in some ways, it seems like Kyle is the one getting played by Theo, since he totally took the bait when Theo made his comment about “getting to know Lola better” and ran with it. Clearly, it was Theo’s attempt to cause problems in Kyle and Lola’s marriage, and thanks to Kyle, that attempt became a reality. Kyle and Lola will no doubt make up soon, but still some damage has been done and now Theo is going to be a real sore spot in their relationship.