BY Heather Hughes on October 21, 2019 | Comments: one comment
Related : Soap Opera, Spoiler, Television, The Young and the Restless 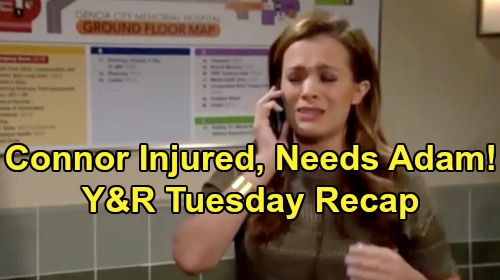 The Young and the Restless (Y&R) spoilers recap for Tuesday, October 22, teases that Chelsea Newman (Melissa Claire Egan) will take Connor Newman (Judah Mackey) to see his grandpa. Victor Newman (Eric Braeden) will be pleased to see Connor, but he won’t think the boy seems quite like himself. While Connor’s off getting a snack, Chelsea will talk about everything Connor’s been through because of Victor’s scheme.

Victor will insist he was trying to save Adam Newman (Mark Grossman) from a dark path. He’ll mention that his son isn’t coming back, but Chelsea will eventually admit she’s trying to get Adam home. In Las Vegas, Adam will be irritated when Nick Newman (Joshua Morrow) arrives at his door. He’ll do his best to turn his brother away, but Nick will argue that Connor’s in trouble.

Since Chelsea thinks Adam’s the only one who can help, Adam will suggest that must bruise Nick’s ego. He’ll needle Nick about his relationship with Chelsea, but Nick will contend that they’re on solid ground. The Young and the Restless spoilers say the conversation will shift back to Connor and the struggles he’s facing. Nick will hate admitting it, but he’ll know that Connor truly needs Adam back home.

After Nick explains all the Connor chaos they’ve been dealing with, he’ll point out that this is Adam’s fault. Adam will argue that it’s just another reason for him to stay away. He’ll add that if he failed Connor again, things would only get worse. Nick will keep trying to change Adam’s mind, but Adam will ultimately tell him to get out.

Moments later, Chelsea will call Nick from the hospital. She’ll explain that Connor threw himself off the jungle gym and broke his arm. Chelsea will be concerned about Connor feeling invincible. Once Nick disconnects, he’ll provide updates and wonder if Adam still feels like he’s not needed in Genoa City.

At the Abbott mansion, Jack Abbott (Peter Bergman) will be a bit nervous about Dina Mergeron’s (Marla Adams) upcoming visit. When he mentions the letter Dina wrote to Stuart Brooks, Traci will suggest that they can bring it up if the visit goes well. After Dina arrives, Y&R spoilers say Jack will let her look through some old photos. Dina will recognize herself when she was in high school, so Traci will read the letter she wrote to Stuart.

Dina will get emotional, especially when Traci gets to the Shakespeare quote. She’ll call that night both wonderful and terrible. Jack will want more Stuart info, but Traci will try to put their mother’s attention on something else. Once Dina’s back at her facility later, Jack will hate that he pushed her too hard. However, Traci won’t think Dina seemed that upset. She’ll feel like they should be thankful for the pleasant visit instead.

The Young and the Restless spoilers say Traci will admit she found something while Jack was gone. She’ll pull out an invitation to the prom afterparty at John Abbott’s (Jerry Douglas) place, which has a note on the back. In this note, Stuart begs Dina to come tonight and promises to change her mind. Traci will declare that whatever happened between them took place right there in that house.

At Crimson Lights, Esther Valentine (Kate Linder) will grill Cane Ashby (Daniel Goddard) and Jill Abbott (Jess Walton) about the will situation. Jill will explain she’s hired someone to authenticate the pages Cane discovered. Cane will also talk about getting knocked out and finding a note. He’ll insist Chance Chancellor claimed he was deep undercover, but Esther will counter that Chance could’ve just mailed them.

Later, the woman Jill hired will provide an assessment. The page leaving the bulk of Katherine Chancellor’s (Jeanne Cooper) fortune to Devon Hamilton (Bryton James) was written on a different kind of paper. The page leaving Katherine’s wealth to Cane matches up with the rest of the will – at least according to the woman authenticating all this.

Cane won’t get why Katherine would give him such a massive gift, but Esther will suggest she considered him family. Talk will turn to Devon and how he’s going to take the news. They’ll all agree that Devon needs to know what Katherine really wanted. Jill will just hope Devon’s willing to honor Katherine’s wishes and make this right.