The Young and the Restless Spoilers: Tuesday, October 22 Review – Connor Self Harms After Victor Visit – Devon NOT Rightful Heir 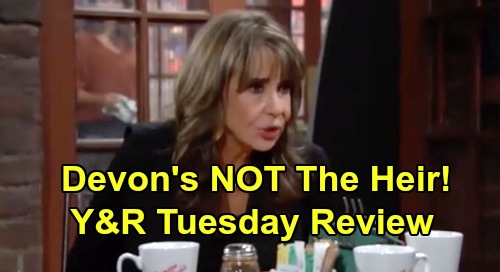 The Young and the Restless spoilers review for Tuesday, October 22, tease that Nick Newman (Joshua Morrow) will track down Adam Newman (Mark Grossman) in Las Vegas. Of course, Adam won’t be happy to see his brother, and he’ll declare that he’s done with Genoa City and the Newmans. But Nick will inform him that Connor Newman (Judah Mackey) is in trouble. They’ll wind up arguing over old issues, but ultimately Nick will fill Adam in about Connor’s recent problems.

Adam will hear about how Connor broke a lamp, hit a kid at school, and then locked Christian Newman (Alex Wilson) in the dark garage. Adam will be sorry that Connor’s having problems, and a side of him will clearly be alarmed to hear the details, but ultimately he’ll say that it was a mistake for him to ever be there for Connor at all, and it would have just hurt Connor more if he had stayed.

While this is going on, Chelsea Lawson (Melissa Claire Egan) will take Connor to see Victor Newman (Eric Braeden). Victor will tenderly apologize to Connor for pretending to be dead. Connor will be pretty withdrawn during the conversation, and later Victor will tell Chelsea privately that he doesn’t seem like himself. They’ll discuss Adam a bit, and Victor will be surprised to hear that she wants Adam to come back. Chelsea and Connor will then head to the park.

Back with Nick and Adam, the men will be arguing about whether Adam should go back and see Connor when Nick gets a call from Chelsea. Chelsea will be calling from the hospital where Connor is being treated. She’ll tell Nick that Connor climbed to the top of the jungle gym, declared himself invincible, and jumped off. He’ll have a broken arm, and Adam will be horrified to hear this. Nick will then turn to Adam and ask him if he still thinks that he doesn’t need to come home.

Of course, Adam coming home may reduce Connor’s acting out somewhat, but it seems in many ways that the damage has already been done. Connor seems like he’s acting out in response to being lied to and abandoned by the adults in his life. Adam coming home might make him feel a bit less abandoned, but it seems that he might still feel angry at what’s already gone down. Connor may have a long road ahead of him, even if Adam returns.

Next, on the new episode of Y&R on Tuesday, October 22, Esther Valentine (Kate Linder), Cane Ashby (Daniel Goddard), and Jill Abbott (Jess Walton) will put their heads together to discuss Katherine Chancellor’s (Jeanne Cooper) will. Cane will explain to Esther that he and Jill will be meeting with a forensic document expert to comment on the authenticity of the two versions of Katherine’s will.

Later, the expert will arrive to share her findings. She’ll say that Katherine’s initials on the new pages are authentic, while the ones on Devon Hamilton’s (Bryton James) version of the will are not. After the expert is gone, Cane will be feeling really uncomfortable about the whole thing – he’ll think that it doesn’t make sense given that he’s not a blood relative of Katherine’s.

But Jill will be more determined to make sure that Katherine’s wishes are honored. She’ll blast Tucker McCall (Stephen Nichols) for his apparent role in this whole thing, since it seems that he forged the documents that said that Devon inherited Katherine’s fortune. Ultimately, the three will determine that Devon will have to be told about this, which will be their next step. That should be a particularly difficult conversation.