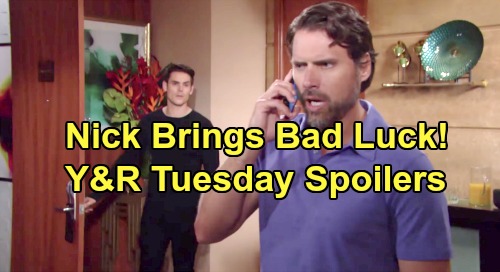 The Young and the Restless (Y&R) spoilers for Tuesday, October 22, tease that Victor Newman (Eric Braeden) will interrogate Chelsea Newman (Melissa Claire Egan). He may hear about Nick Newman’s (Joshua Morrow) plan to bring Adam Newman (Mark Grossman) home and wonder if there’s more to the story. Victor got some closure before Adam left town, and he’s made peace with the situation. He may warn that he doesn’t want Adam to be harassed by his brother or set up for trouble.

Chelsea will assure Victor that Connor Newman (Judah Mackey) is spinning out. It’s clear that Connor needs his dad more than ever, so Victor should understand that. However, they’ll have to talk about what happens from here. Victor will have no interest in pressing charges, so he’ll hope Nick and the rest of the Newmans can respect his wishes.

That’ll suit Chelsea just fine since she needs Adam free for Connor. The whole point of bringing Adam home is so he can support his son. Adam can’t do that from behind bars, so she may appreciate Victor’s mercy. Although Chelsea can’t condone many of the things Adam’s done, he’s the only one who can help Connor right now.

Chelsea will convince Victor that her motives are pure and perhaps promise she can keep Nick in line. Of course, Nick will be on his own in Vegas. His visit to Adam’s suite will naturally spark some conflict, so be prepared for an outburst or two. Adam will assume Nick’s there to verbally assault him some more, so he’ll lash out as well. He’ll be sick and tired of all the Newman drama.

Once Nick explains Connor’s ordeal, Adam won’t think it’s that dire. He’ll suggest Nick just wants to swoop in and look like a hero to Chelsea. The Young and the Restless spoilers say Adam will give that a hard pass. He won’t be interested in helping Saint Nick seem extra saintly.

By midweek, Chelsea will phone Nick with a shocker. She’ll reveal that Connor’s been rushed to the hospital, so that’ll be unsettling news for both Nick and Adam. Back in Genoa City, Cane Ashby (Daniel Goddard) will work to prove that the will pages he discovered are real. Someone will indeed authenticate them, so Jill Abbott (Jess Walton) will want to tell Devon Hamilton (Bryton James) ASAP.

Jill will feel like Devon needs to know what Katherine Chancellor (Jeanne Cooper) really wanted. All of this still seems shady, so who knows what the truth is? The Young and the Restless spoilers say some twists and turns are brewing, so don’t miss all the action. We’ll give you updates as other Y&R news comes in. Stick with the CBS soap and don’t forget to check CDL often for the latest Young and the Restless spoilers, updates and news.