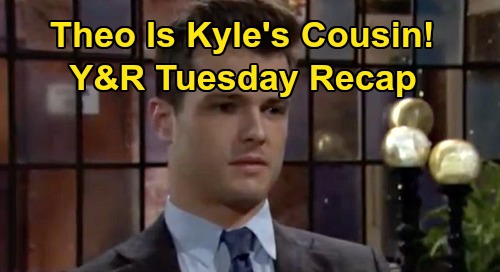 The Young and the Restless (Y&R) spoilers recap for Tuesday, October 29, teases that Victoria Newman (Amelia Heinle) will get updates on Billy Abbott’s (Jason Thompson) latest run-in. Adam Newman (Mark Grossman) knows Billy tried to run him down, but Billy will point out that they called a truce. Victoria won’t put much stock in that, but they’ll shift gears and start planning for Halloween with the kids.

At Adam’s penthouse, he’ll get a visit from his father. Victor Newman (Eric Braeden) will insist they need to finish the conversation they were having before Adam left. Adam will point out that Connor Newman (Judah Mackey) is the only reason he came back. He’ll wish he could just move away with Connor since they both hate Genoa City so much.

Victor will make it clear that he’d never stand for that. He’ll feel like Connor needs the support of a stable, loving family. Adam won’t think the Newmans are so stable! He’ll want to avoid Victor and the rest of the family from now on. Later, Y&R spoilers say Victoria will grill an upset Victor. She’ll guess this involves Adam, but Victor won’t offer the details. He’ll just wish that the rest of the Newman clan would give Adam another shot.

Talk will turn to Billy and how he’s doing these days. Victor will hint that if Billy screws up again, forgiveness may not be that simple. At Society, Theo Vanderway (Tyler Johnson) will praise Summer Newman (Hunter King) to Phyllis Summers (Michelle Stafford). He’ll feel like Summer should be a star influencer at the next Grand Phoenix party, but Phyllis will think this pitch reeks of desperation.

At home, Lola Abbott (Sasha Calle) will gripe about Kyle Abbott (Michael Mealor) using up all the hot water. Kyle will cozy up to Lola and suggest showering together is the solution. A little later, Lola will spot Theo and express concern over his unemployment. Theo will put on a smile, but his confidence will crack once he’s alone.

At the Abbott mansion, Jack Abbott (Peter Bergman) and Traci Abbott (Beth Maitland) will discuss their discovery. Jack will be eager to track down their half-brother, but Traci won’t be so sure this is a good idea. She’ll worry that Eric Vanderway (Jon Briddell) may not even know he’s adopted.

After Jack calls Kyle over, he’ll ask about Theo’s father. Traci will insist Jack should just come clean and let Kyle know what’s really going on. Jack will admit that Theo and Kyle may be related. He’ll explain that Dina Mergeron (Marla Adams) gave a baby up for adoption and was taken in by the Vanderways. Jack will note that the child was named Eric, so Kyle will share what he remembers. He’ll mention that Theo’s dad died when he was high school and the family was from Chicago.

Since Eric’s adoptive parents were from Chicago, Jack will think they’re on the right track. Traci will still feel like they should leave this alone, but Jack will want firm answers. Back at Society, Kyle will fret to Lola about potentially being Theo’s cousin. They’ll discuss the evidence before Lola offers a suggestion. She’ll think Kyle can subtly find out the name of Theo’s father.

Kyle will invite Theo to dine with him soon after, so he’ll have a chance to work Theo’s dad into the conversation. After Theo produces a pocket watch belonging to his father, Kyle will see the initials “E.V.” Theo will confirm that his dad’s name was Eric Vanderway, and the news clearly won’t please Kyle!

Other Young and the Restless spoilers say Phyllis will head over to Adam’s place. She’ll be eager to talk about crushing Victor and taking down Newman Enterprises. Adam will urge Phyllis to move on with her life, but she won’t want to lose her scheming partner. After Adam hands over a $10 million check and tells her to leave him alone, Phyllis will rip it up. She’ll refuse to let Adam get rid of her that easily.

In therapy, Billy will feel like he’s doing great. He won’t even be sure he needs to continue the sessions, but his therapist will offer a warning. Even the slightest thing could trigger Billy and send him into a downward spiral again. The Young and the Restless spoilers say more trouble could be brewing, so stay tuned. We’ll keep you posted as other Y&R details emerge. Stick with the CBS soap and don’t forget to check CDL often for the latest Young and the Restless spoilers, updates and news.