BY hellodrdavis on October 7, 2019 | Comments: 2 comments
Related : Soap Opera, Spoiler, Television, The Young and the Restless 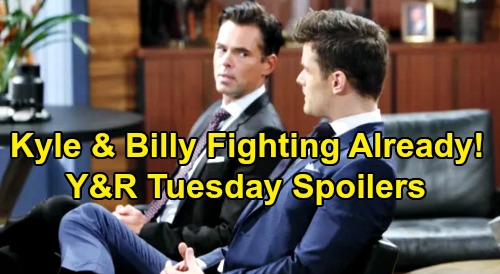 The Young and the Restless spoilers for Tuesday, October 8, tease that Billy Abbott (Jason Thompson) and Kyle Abbott (Michael Mealor) will have a very important Jabot matter to discuss. As Y&R viewers know, Jack Abbott (Peter Bergman) recently stepped back from Jabot to work with Traci Abbott (Beth Maitland) on writing the story of the Abbott family. That’s taking his full attention these days, and so he asked Billy and Kyle to take over Jabot and run the company together.

Billy and Kyle enthusiastically agreed to work together for the good of the company, and while each has run the company autonomously, they’ve certainly not co-run Jabot before. That will be a new experience, and it seems that one of the first orders of business will be figuring out who gets the CEO office. According to Y&R spoilers, they’ll both want the office, so someone’s going to have to compromise here.

Meanwhile, on the new episode of Y&R on Tuesday, October 8, Phyllis Summers (Michelle Stafford) will experience a victory. Y&R spoilers indicate that she’ll triumph in a situation, so this may have something to do with her interest in finding Adam Newman (Mark Grossman) and/or following Cane Ashby’s (Daniel Goddard) trail. She has been very interested in Cane’s interest in tracking down Adam, so she might score some information about Adam’s whereabouts.

Y&R spoilers for later in the week suggest that Phyllis will indeed find Adam in Las Vegas, and that she’ll completely surprise Cane by popping up there. And Y&R viewers will remember that Phyllis previously seemed to know something about Adam’s relationship and dealings with Chance Chancellor (John Driscoll) in Las Vegas, so perhaps she’ll put some things together and figure out what’s going down in Vegas.

Finally, Amanda Sinclair (Mishael Morgan) will face a tough critic, and it appears that this will be Phyllis, who will encounter the Hilary Hamilton (Mishael Morgan) lookalike and have some questions for her. Of course, Phyllis and Hilary were very good friends, so Phyllis will probably want to know exactly who Amanda thinks she is coming to Genoa City and messing with the people who knew and loved Hilary.

Plus, Phyllis may realize that Amanda is allegedly working with Chance, which should interest her greatly, so she might just take the opportunity to fish for information about that situation, since it will relate to her upcoming trip to Las Vegas. At any rate, it should be a spirited conversation between these two, with Amanda likely on the defensive.