BY hellodrdavis on October 8, 2019 | Comments: one comment
Related : Soap Opera, Spoiler, Television, The Young and the Restless 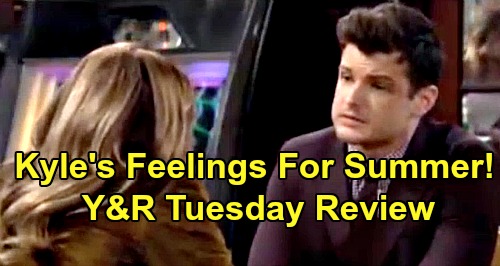 The Young and the Restless spoilers review for Tuesday, October 8, tease that Kyle Abbott (Michael Mealor) will have a particularly bad day. He’ll arrive to work at Jabot to find Billy Abbott (Jason Thompson) and Victoria Newman (Amelia Heinle) there. Victoria will have just learned that Victor Newman (Eric Braeden) is returning as CEO to Newman Enterprises and Billy will have offered her an executive position at Jabot. Victoria won’t be into it and will think that now isn’t a good time for her to make a decision about jumping ship.

And then Jack Abbott (Peter Bergman) will chime in that he agrees with Billy that Victoria would be an asset to Jabot, but no one will bother to ask Kyle what he thinks. Kyle will offer his opinion, which is that Victoria may want to consider staying on at Newman Enterprises to prepare for the day when Victor does permanently step down. Billy will disagree. And Kyle will be put off that Billy is acting like he’s totally in charge.

After Jack and Victoria leave the office, Kyle will lay into Billy and say that hiring Victoria isn’t his call to make, because Jack put them both in charge and they’re equals. Billy won’t respect what Kyle is saying and Kyle will tell Billy not to pull rank, which will prompt Billy to call Kyle a kid. This will infuriate Kyle, who will end up leaving the office while Billy takes a call and assumes his place at Jack’s desk.

Later, Kyle will meet with Summer Newman (Hunter King) at Crimson Lights for a gripe session. He’ll complain about Billy’s unilateral decision to offer Victoria a job and about Billy calling him a kid. They’ll commiserate together about their respective family troubles and offer each other support. Kyle will touch Summer’s hand tenderly as they talk, and they’ll clearly share a moment. Afterwards, Kyle will go to Society and kiss Lola Abbott (Sasha Calle), obviously displacing his feelings about Summer onto Lola.

Clearly, it seems that Kyle and Summer still have a strong connection. While nothing untoward has happened between them, they are clearly sharing an important bond and can support each other in a way that they can’t relate to others. Summer’s really having a hard time trying to get the emotional support she needs from Theo Vanderway (Tyler Johnson), and Lola will probably never understand Kyle’s complicated relationship with his family in the way that Summer does.

Meanwhile, on the new episode of Y&R on Tuesday, October 8, Theo will have a bad day as well. He’ll request a meeting with Devon Hamilton (Bryton James) at Society. Devon will listen as Theo once again rips into Mariah Copeland (Camryn Grimes), saying that she’s made all sorts of mistakes and doesn’t have good instincts yet. Devon won’t be having it, and he’ll tell Theo that he’s out.

Theo will then try to talk his way out of being fired, but Devon will inform him in no uncertain terms that he’s no longer employed in any capacity by Hamilton-Winters. Theo will be deflated and seek out Lola Abbott (Sasha Calle) in the kitchen. They’ll have some fun as she chides him about nearly passing out the last time they were together, but he’ll push things too far and jokingly make the comment that he “wishes he had met her before Kyle did,” which will prompt her to storm out.

Finally, Phyllis Summers (Michelle Stafford) will have a big day of her own. She’ll start out with a vigorous argument with Abby Newman (Melissa Ordway), who will needle her about her friendship with Adam Newman (Mark Grossman). Then, Phyllis will meet Amanda Sinclair (Mishael Morgan), whom she’ll ask for Chance Chancellor’s (John Driscoll) contact information…which she won’t get.

However, despite Amanda’s unwillingness to help her, Phyllis will later show up in Las Vegas as she joins a poker game at a table where Adam is sitting. Phyllis will slink in and ask to be dealt into the game, prompting Adam to look up from the table in surprise as Phyllis winks at him.