BY Heather Hughes on September 9, 2019 | Comments: one comment
Related : Soap Opera, Spoiler, Television, The Young and the Restless 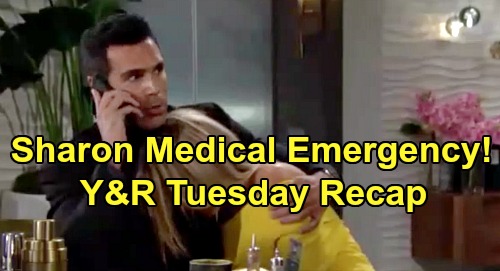 The Young and the Restless (Y&R) spoilers Recap for Tuesday, September 10, tease that Zoe Hardisty’s (Anna Grace Barlow) plan will pay off. Of course, it’ll take a little time for drinks to be passed around and downed. Before the drugs take effect, Sharon Newman (Sharon Case) will spot Rey Rosales (Jordi Vilasuso) getting another woman’s number. She’ll tell Mariah Copeland (Camryn Grimes) that Rey has a right to move on, but she’ll think he’s doing it a bit fast.

Sharon and Mariah will both think Sharon’s upcoming road trip is what’s best right now. Some time and distance should work in Sharon’s favor. Tessa Porter (Cait Fairbanks) will bring them some drinks soon after. Over with Phyllis Summers (Michelle Stafford), she’ll let Summer Newman (Hunter King) know she’s proud of her and doesn’t intend to spoil the bash.

After Zoe watches Phyllis and Summer embrace, she’ll push Phyllis to accept a Grand Sangria. However, Phyllis will end up turning it down. Moments later, Phyllis will realize the guests are starting to exhibit some strange behavior. She’ll turn her attention to Abby Newman (Melissa Ordway) eventually and mention Victor Newman (Eric Braeden) didn’t attend.

Abby will get agitated as she replies that her father’s not feeling well. She’ll also be suspicious during a chat with Chelsea Newman (Melissa Claire Egan) and Nick Newman (Joshua Morrow) afterward. Abby and Chelsea will think it’s weird that Phyllis isn’t causing trouble.

Meanwhile, guests will keep gulping down those drugged signature drinks. Devon Hamilton (Bryton James) and Nate Hastings (Sean Dominic) will be among those who partake. Over by the pool table, Summer will give Kyle Abbott (Michael Mealor) updates on the big numbers Jabot’s doing. Kyle will suggest Summer could use the Jaboat as a bonus, but Theo Vanderway (Tyler Johnson) will butt in and rile up his enemy.

Lola Abbott (Sasha Calle) will think a game of pool could serve as a distraction, but Kyle and Theo will continue to clash. After Lola drags Kyle away, Summer will lash out at Theo and insist she’s had enough. Back with Sharon, she’ll struggle to balance herself before Rey hands over another drink. He’ll mention that Lola’s been doing some matchmaking before they share a toast.

Next, Zoe will look pleased as she takes in the scene. The drugs will really start working their magic as Theo plays some air guitar and Tessa spins Mariah around in a chair. Summer will offer Theo an apology before they kiss passionately and get more drinks from Zoe. The troublemaker will insist this party’s going to bring great pics and plenty of new followers.

Back with Sharon, her speech will be slurred as she listens to Mariah and Tessa’s drugged advice about Rey. By the billiards table, Rey will feel like the pool balls are looking blurry. Once Rey finds Sharon crying, he’ll take her in his arms and listen to her regrets about their romance. After Sharon plants a kiss, she’ll pass out since Zoe’s drugs mixed with her meds.

Over with Mariah and Tessa again, they’ll gush about each other before having an intense make-out session. Theo will soon realize they’re all on Molly, so he’ll realize someone must’ve drugged the drinks. He’ll head off to get a room to share with Summer, which will leave her to join Tessa and Mariah on the dance floor.

Chelsea and Abby will also realize people are tripping, so they’ll come to the same conclusion about the drinks. Next, Phyllis will spot Zoe filming the loopy guests. Nate will be transfixed by the colorful lights as things take a more serious turn for Devon. He’ll ultimately have a panic attack, so Elena Dawson (Brytni Sarpy) will offer reassurance.

Other Young and the Restless spoilers say Summer will tell Kyle about Molly being in the Grand Sangria. She’ll kiss Kyle as Lola gapes at them. It won’t be long until Kyle blames Theo for this chaos, but Theo will insist he had nothing to do with it. Back with Rey, he’ll call the station to report a mass drugging as Abby declares this is her worst nightmare.

Y&R fans can expect Paul Williams (Doug Davidson) to arrive next. He’ll hear about the situation from Rey and hope that the culprit can be caught through security footage. The Young and the Restless spoilers say Paul will shut the party down, and everyone will need to visit the hospital for a blood test.

Over with Lola again, she’ll fret to Kyle about Summer’s lingering feelings for him. Chelsea and Abby will talk to Phyllis nearby, but she’ll assure them she wouldn’t do this to her daughter. They’ll need to keep looking for the guilty party. However, Phyllis will already have strong suspicions due to a previous discussion with Zoe. She’ll send Zoe a text insisting that they need to talk.

It sounds like a wild episode’s on the way. We’ll keep you posted as other Y&R news comes in. Stay tuned to the CBS soap and don’t forget to check CDL often for the latest Young and the Restless spoilers, updates and news.