BY hellodrdavis on September 3, 2019 | Comments: one comment
Related : Soap Opera, Spoiler, Television, The Young and the Restless 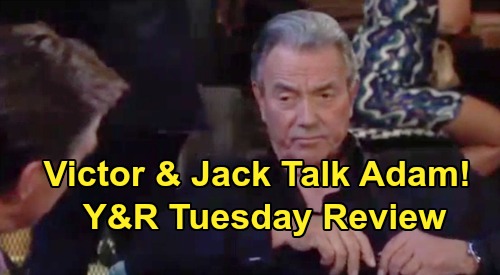 The Young and the Restless spoilers review for Tuesday, September 3, tease that Jack Abbott (Peter Bergman) will have a long chat with Victor Newman (Eric Braeden) at Society. They’ll do the usual sparring about business, needling each other in good humor about their respective companies. Eventually, talk will turn to Adam Newman (Mark Grossman) and what’s been going on with his path of destruction.

Victor will lament about how he failed Adam, and that’s why Adam has done so many horrible things. They’ll discuss how Adam felt abandoned when Victor left him with his mother, and how Adam hates him for it. Jack will reassure Victor that he thought he was doing the right thing, and that’s all he could do.

Jack will even bring up his recent feelings of longing and melancholy, and in his own way he’ll ask for Victor’s advice about the matter. Jack will say that he has everything a man could want on the surface, yet still it feels like something is missing. Victor will understand the feelings of discontent and “that inexplicable void.” Jack will wonder what Victor did when he felt that way, and Victor will say that he left town and got everything behind him, and after a while he found what he wanted.

Later, Jack will summon Kyle Abbott (Michael Mealor) to the Abbott estate, and he’ll explain that he’s going to leave for a while and that he’d like Kyle to become Interim CEO at Jabot while he’s gone. Kyle will be shocked by the request and he’ll be touched that Jack trusts him to fill in after what happened the last time he was in charge. Jack will say that they’ve come a long way since then, and that he’s sure Kyle will make him proud.

Jack will then head to his car and will take off for parts unknown. He’ll look in the rearview mirror and the young version of John Abbott (Johnathan Stoddard) will smile at him from the backseat. John will say, “Where are we headed to, Jackie?” Jack will reply with a big smile that he doesn’t know, but that he’ll let him know when they get there.

Meanwhile, on the new episode of Y&R on Tuesday, September 3, Elena Dawson (Brytni Sarpy) will arrive home after a long workday to greet Devon Hamilton (Bryton James). He’ll have been thinking about the issue with Katherine Chancellor’s (Jeanne Cooper) will, even though he still has no idea what the discrepancies with the will are about. He’ll say that he had his lawyer reach out to the lawyer who sent the letter, Amanda Sinclair.

Devon will find himself thoughtful and remembering Katherine. He’ll tell Elena all about Katherine and how she was a remarkable woman. He’ll note how things were rough between him and Katherine at first, but that things eventually changed, and that when she left him everything in her will changed his life. Elena will think that Devon has certainly done right by Katherine’s legacy.

Ultimately, they’ll be left with a lot of questions – Who’s challenging the will, and why? And why did that person wait so long to contest the will? Devon will vow not to let anyone take what he and Neil Winters (Kristoff St. John) built, and he and Elena will vow to get through this ordeal together.

From the intrigue to the romance, everyone wants more #YR! Don’t miss everything coming up this week. 👏 pic.twitter.com/UK7WCLQoqW