BY Heather Hughes on January 30, 2019 | Comments: one comment
Related : Soap Opera, Spoiler, Television, The Young and the Restless 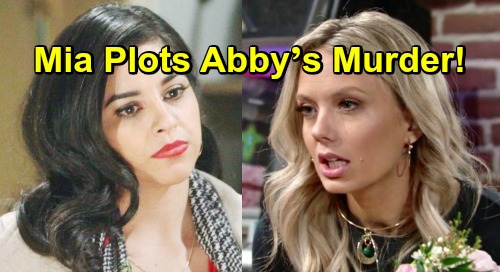 The Young and the Restless (Y&R) spoilers tease that Mia Rosales (Noemi Gonzalez) could be headed down a dark and dangerous path. From the moment she showed up in town, Mia was manipulative and obsessed. She somehow thinks she deserves both Rosales brothers – or perhaps she just likes going back and forth between them.

At first, Mia claimed to be all about winning Rey Rosales (Jordi Vilasuso) back. She marked her territory and made sure Sharon Newman (Sharon Case) kept her distance. Meanwhile, Mia was busy sniffing around Arturo Rosales (Jason Canela) as well. She apparently likes to keep her options open!

Despite her reunion with Rey, Mia just can’t let Arturo be happy with Abby Newman (Melissa Ordway). She’s on a mission to sabotage their romance, but how far will she go? The Young and the Restless spoilers say someone will take drastic action to tear Arturo and Abby apart. Mia is the only one who’s expressed any disapproval, so it has to be her.

On Tuesday’s episode, Mia had a twisted fantasy about chopping off Abby’s hair. She looked awfully nutty as she stared at the scissors afterward. When you combine all that with Mia’s growing obsession with Arturo, it has to spell trouble. Y&R seems to be setting the stage for Mia’s crazy turn.

Many Young and the Restless fans can see the writing on the wall. Several Twitter users spoke out about it, including some who are completely on board with an insane Mia. One viewer said, “A little Craycray Mia might be fun!” Others think it’ll get much worse than just outlandish mischief. “Mia is psychotic,” another Twitter user said. “Mia is gonna try to kill Abby.”

We wouldn’t be a bit surprised if Mia indeed attempted murder. She’s coming unhinged and some Young and the Restless spoilers may point in a perilous direction. During February sweeps, Mia will go too far and spark a shocking response from Rey. If Mia loses Rey and still can’t have Arturo, things could get ugly.

In a recent cast member Instagram story, Michael Mealor (Kyle Abbott) and Camryn Grimes (Mariah Copeland) were spotted on the hospital set together. If they were filming scenes there as this suggests, who would both Kyle AND Mariah be visiting? That’s an interesting combination.

Abby might fit since Kyle would definitely be there to support her along with the rest of the Abbott clan. Mariah has a far more complicated relationship with Abby, but it’d be reasonable for her to show up – especially if she’s with Kyle when he receives bad news.

Mariah may not be Abby’s friend, but she’s not a total enemy either. They had a run-in not too long ago, but Mariah admitted she felt “lousy” about it afterward.

Whatever the case, here’s what we’re dealing with: Mia’s seemingly boarding the train to Crazy Town, Abby may be in danger and some hospital scenes are looming. All of that might add up to a major medical crisis for Abby!

We’ll give you updates as other Y&R details emerge. Stick with the CBS soap and don’t forget to check CDL often for the latest Young and the Restless spoilers, updates, and news.