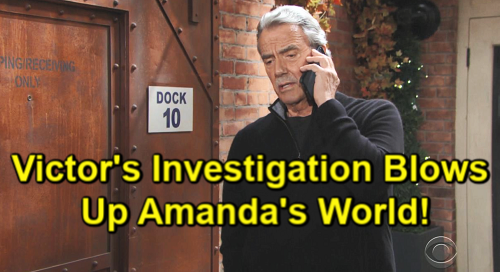 The Young and the Restless (Y&R) spoilers tease that the jig will be up for Amanda Sinclair (Mishael Morgan). Y&R fans know Amanda’s been cagey about her background, which has led to plenty of suspicions. Devon Hamilton (Bryton James) has been puzzled since Amanda basically has no Internet presence. It’s understandable for him to be curious about who Amanda really is and why she looks exactly like Hilary Hamilton (Mishael Morgan).

There’s also the matter of who recruited Amanda for the will drama. She’s been making plenty of hush-hush phone calls as well, so she’s a walking red flag at this point. Alarm bells certainly seemed to go off for Victor Newman (Eric Braeden). After he met Amanda and learned she was defending Nate Hastings (Sean Dominic), Victor immediately called a minion to dig up everything possible on Amanda.

Will Victor be the one to blow up Amanda’s world? Based on the timing of Victor’s digging and Amanda’s looming confession, he just might be. The Young and the Restless spoilers say Amanda will be forced to confess next week. She’ll spin stories for as long as she can, but the truth will ultimately be her only option. Victor may make sure of that!

Since Victor’s retired and needs something to do, it’s smart to include him in stories like this. They have to find ways to keep him busy. Eating candy for breakfast and watching The Price Is Right isn’t going to cut it!

Amanda already referred to an “old jerk” who roped her into this mess, which lines up with Colin Atkinson (Tristan Rogers) – the person Jill Abbott (Jess Walton) currently suspects. However, there could be someone else involved here as well.

Y&R previously played up Adam Newman (Mark Grossman) and Chance Chancellor’s connection. Victor even mentioned it to Adam at one point, which left Adam taken aback by his father’s knowledge. Was all that really just a dead end or is there more to it? The Young and the Restless spoilers say Victor will catch Adam off guard again during the week of November 11-15. Will he suspect Adam’s connected to this Amanda chaos somehow?

Adam Newman Could Still Be Innocent Despite Vegas Links

It’s possible Adam was caught up in it initially and later bowed out. It’s also possible Adam was simply in the loop on what was going on and chose to stay quiet. Unless Y&R rewrote some things and shifted their strategy, they’ll surely want to deliver some kind of explanation. The Adam-Chance link was consistently brought up.

Of course, Adam could still be innocent despite that link. Jill doesn’t believe Chance was ever involved at all, so that may be something Adam can help clear up for Victor. Regardless, Victor could be poised to crack the Amanda case and force some answers out of her! He might consider it a way to help Nate, who deserves a favor since he’s paying the price for Victor’s fake death plot.