The Young and the Restless Spoilers: Victor Is Dying, Nikki Fears She’ll Lose Him – Will This Change Adam’s Hardcore Plans?

BY Heather Hughes on May 24, 2019 | Comments: 2 comments
Related : Soap Opera, Spoiler, Television, The Young and the Restless 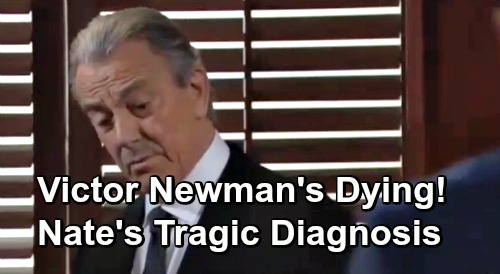 The Young and the Restless (Y&R) spoilers tease that Victor Newman (Eric Braeden) will do what he does best – keep secrets from his family. Those secrets normally involve schemes or back-from-the-dead family members in Adam Newman’s (Mark Grossman) case. However, Victor’s keeping something else from his loved ones and it involves some personal, scary news.

Y&R fans can expect Dr. Nate Hastings (Sean Dominic) to pay Victor a visit on a new Y&R episode during the week of May 27-31. It seems some medical issue has come up, which required a few tests.

After Nate looks over the results, he’ll want to give it to Victor straight. He’ll let Victor know this isn’t good, but he won’t want him to give up. Nate will insist that they can fight this, so Victor will confirm that he intends to.

However, Victor may realize he has to at least bring Nikki Newman (Melody Thomas Scott) in the loop. He may want to leave his kids in the dark a while longer, but Nikki is his wife. She’s the love of his life and would want to know what’s going on.

Even if Victor tries to keep hiding his struggles, Nikki will probably sense that something’s wrong. She knows Victor better than anyone, so she may push for the whole truth.

The Young and the Restless spoilers say this will be a challenging summer for Victor and Nikki. They’ll face an unexpected crisis together, so that’s probably referring to Victor’s medical issue. Nevertheless, the Newman power couple will stand tall. They’ll tackle the drama head-on in typical Newman fashion.

Whether this is some form of cancer or perhaps a rarer condition, Victor and Nikki won’t let it get them down. They’ll become an even stronger duo because of what Victor’s up against, so that’ll bring some sweet moments. The Young and the Restless spoilers hint that Nikki will be terrified of losing Victor, but she’ll do her best to stay strong for him.

Could this affect Adam’s currently manipulative storyline? Is there a chance Adam will soften toward his father if Victor might be nearing the end?

Fortunately, Victor’s time probably isn’t running out just yet. Eric Braeden doesn’t seem ready to take his final bow as “The Moustache,” so Victor may come roaring back after a full recovery.

We’ll keep you posted as other Y&R details emerge. Stick with the CBS soap and don’t forget to check CDL often for the latest Young and the Restless spoilers, updates, and news.