BY Sean O'Brien on February 3, 2019 | Comments: one comment
Related : Soap Opera, Spoiler, Television, The Young and the Restless 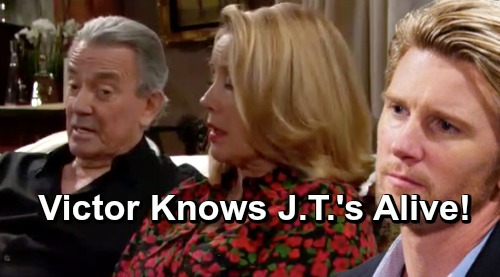 The Young and the Restless spoilers tease that the great Victor Newman’s (Eric Braeden) spooked thoughts about J.T. Hellstrom (Thad Luckinbill) being alive could soon be proven true. No mortal human being would have been able to live past Nikki’s (Melody Thomas Scott) head bang and subsequent unlawful Fearsome Foursome burial. But this is Genoa City, where all soap outcomes are possible.

Of course a wide segment of Y&R’s fan base will ironically scream bloody murder if Luckinbill’s character, not his evil twin brother, or some other doppelganger, is alive. The persistence of J.T. would rank with the more outrageous reveals in this entire show’s history. But as savvy fans recall, departed executive producer and head writer Mal Young promised a four act J.T. storyline that would wow the audience. So this possibility can’t be denied.

Victor isn’t denying it. He’s come to believe that J.T. could be the only person who has the background and motivation to be attacking the Newman family. Yes, this character would have the negative energy to come back hard, but how would he have survived all that happened, with a plausible explanation to Y&R’s devoted audience?

This is escapist fantasy and not the nightly news, circa pre-cable. So sans hand-picked topical events that were delivered to a wanting audience, TPTB at Y&R, meaning Young before he left, or the new head honcho’s, would have to claim that J.T. survived massive head trauma and then either revived to dig himself out of six square feet of dirt, or was rescued by some passerby. Either suggestion would seem fully improbable, in the real world, which GC is not.

So, is it possible that Victor now believing that J.T. is immortal is simply a head fake to extend a gigantic arc that’s about to reach ten months by the middle of this month, February? Yes.

The only reasonable way that J.T., himself, can plausibly still be living, is if he wasn’t the person Nikki hit over the head on that fateful mid-April 2018 night. Inventing a retro swap, where J.T.’s evil brother, or doppelganger, had taken over J.T.’s life at that time would be soapily acceptable.

How great it would be to see that the J.T. so many fans knew and liked never devolved into the one-dimensional monster Y&R purposely pushed into the show. No, J.T. didn’t become a bad guy because he had job setbacks and still held a grudge about Colleen (Tammin Sursok). Instead, a look-a-like lunatic neutralized Mr. Hellstrom, acted out against Victoria (Amelia Heinle), was killed by Nikki and buried by the coverup crew (alternative nickname used).

Of course ending the storyline in the manner described would mean that an additional character would be torturing Nikki and framing Victor. That person would be holding J.T. hostage somewhere, while avenging the look-a-like’s death.

A wife, or girlfriend of the departed kook would be the villain in this instance. Victor and Nikki would be proven wrong, with the real J.T. found and redeemed. This implies that Y&R wants to present an uplifting ending, rather than a dark finale to a ride that’s gone well past its prime.