BY Sean O'Brien on April 26, 2019 | Comments: one comment
Related : Soap Opera, Spoiler, Television, The Young and the Restless 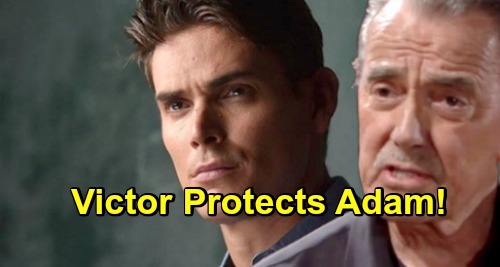 The Young and the Restless spoilers tease that Victor Newman (Eric Braeden) must be even more cautious than the Moustache normally is. Adam Newman (Mark Grossman) lives! But no one can find out because this undead man has years left to serve on a prison sentence, as hardcore fans remember.

Seasoned soap fans know that storyline refreshers are offered to the audience to remind devoted viewers what happened the last time a character was seen and to help newer viewers catch up.

Long story short with Adam (as then played by the great Justin Hartley, circa 2016), he was supposedly killed by Chloe Mitchell (Elizabeth Hendrickson) three years ago this coming September and hasn’t been seen since.

Who expected to see him, other than the most devoted Adam fans? The man was seemingly blown to bits, literally. Paul Williams (Doug Davidson) advised that his crime scene investigation team located elements of Adam’s DNA around the area of the woodsy cabin where Chloe had handcuffed him to a metal bedpost inside the structure, which the Chief still has no knowledge of.

That was just before Chloe purposely ruptured a gas line and departed before the cabin blew up. No mortal would have survived the blast, especially considering that she’d shot Adam with a drug-filled dart.

He’d been wrongly imprisoned because Chloe, never having gotten past Delia Abbott’s (Sophie Pollono) accidental death, that Adam (as then played by the electric Michael Muhney) caused, but didn’t admit to for a very long time, set him up for the so-called murder of Constance Bingham (Sally Kellerman). Talk about a complex plot and last sentence, wow!

The charge was totally bogus. Adam beat the wrap, but later bludgeoned a prison guard while having a deranged episode and received an additional sentence. Victor, who’d fully reconciled with his prodigal son, orchestrated Adam’s escape during transport to the jail from the Genoa City courthouse, and the detour to the cabin was on.

With a backstory as long as Adam’s, it makes total soapy sense that Victor is being overly cautious now. He doesn’t want to do anything that will result in a big house redux for the character Grossman is now playing.

Of course all of the above assumes that Victor’s Las Vegas, Nevada, dealings and the very suspicious psychiatrist bill, that Nikki Newman (Melody Thomas Scott) and Vickie Newman (Amelia Heinle) found, are both related to Adam’s comeback.

Grossman’s hire was fully confirmed within the last month-plus. With that in mind and daytime drama’s recording schedules being six weeks in advance, the return of Adam seems nearly at hand. So, fans will expect dialogue to detail this character’s recent past, followed by the revival of the infamous man himself.