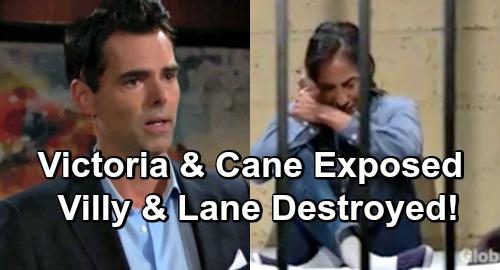 The Young and the Restless (Y&R) spoilers tease that Victoria Newman (Amelia Heinle) will struggle with some complicated feelings. She’s been growing closer to Billy Abbott (Jason Thompson) lately, but does she love him as more than a friend and the father of her children? That’s something Victoria will have to figure out over the next couple weeks.

Of course, we have to wonder if Victoria’s lip lock with Cane Ashby (Daniel Goddard) influenced her need to decide. Cane ranted about Victoria’s relationship failures as well as her loneliness. For reasons that can only be described as soapy and plot-driven, that was apparently a turn-on for Victoria. Their anger led to an intense kiss in the heat of the moment.

However, Victoria also kisses Billy in Wednesday’s episode. Is that because she really wants him or just wants to prove Cane wrong? Is Victoria just scared of what happened with Cane and eager to be with someone else? Perhaps there’s some genuine attraction between Cane and Victoria. Maybe it was more than a momentary lapse in judgment.

The Young and the Restless spoilers say Victoria will try to put her smooch with Cane behind her. Cane will try to do the same since he wants to keep his family intact. That means they may not get a chance to fully explore their potential feelings just yet. Nevertheless, they could be lurking just under the surface.

Y&R fans can expect this secret to build toward big trouble. Victoria will surrender to her feelings for Billy and set him up to feel betrayed all over again. Even though the Cane kiss happened while Victoria was unattached, that may not matter to Billy. Phyllis Summers (Gina Tognoni) slept with Nick Newman (Joshua Morrow) when they were on a break, but he still viewed it as cheating.

The fact that Victoria’s keeping it a secret will be the main problem. Naturally, Cane’s marriage may be at risk as well. Lily Ashby (Christel Khalil) could somehow get wind of Cane and Victoria’s dalliance. She may end up cutting off all visits and filing for divorce. Lily might do it out of bitterness or she may just think Cane’s better off moving on.

Regardless, one make-out session will bring massive consequences. The Young and the Restless spoilers say Cane and Victoria will suffer greatly once it’s exposed. After the smoke clears, could they actually acknowledge what’s between them? Could Cane and Victoria become an item?

It sounds like some hot drama’s ahead in Genoa City. We’ll give you updates as other Y&R news comes in. Stay tuned the CBS soap and don’t forget to check CDL often for the latest Young and the Restless spoilers, updates and news.