BY Kinsley Goldman on May 29, 2019 | Comments: one comment
Related : Soap Opera, Spoiler, Television, The Young and the Restless 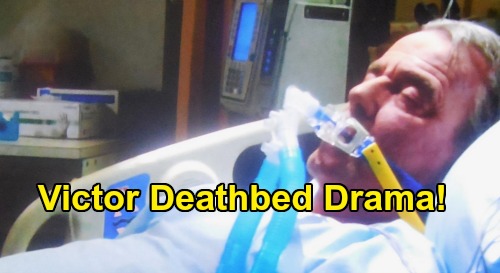 The Young and the Restless (Y&R) spoilers tease that Victor Newman (Eric Braeden) will fight for his future. He’s apparently ill and may not have long left to live if something doesn’t change. When Dr. Nate Hastings (Sean Dominic) showed up to see him, Victor asked what the diagnosis was and learned it wasn’t good news. He wanted to know all the treatment options, no matter how experimental.

Of course, we have to ask ourselves why Y&R’s telling this story. It undoubtedly ties in with all the Newman family chaos that’s erupted. The Young and the Restless spoilers say things will get far worse before they get better. Now that Adam Newman (Mark Grossman) is back, he’s the resident manipulator in town. Adam’s willing to do whatever it takes to get what he wants.

Nick Newman (Joshua Morrow) wants to protect Christian Newman (Jude and Ozzy McGuigen) and the father-son bond they share. Victoria Newman (Amelia Heinle) wants to protect her right to be top dog at Newman Enterprises. Adam has turned the Newman world upside down and nothing’s going to straighten out anytime soon.

As Adam grows closer to Sharon Newman (Sharon Case), that’ll only leave Nick more riled. He still cares about Sharon a great deal. A part of Nick will always love her, so he’ll hate to see Sharon setting herself up to get hurt. If Adam continues to bring out Billy Abbott’s (Jason Thompson) dark impulses, that could make more waves on Victoria’s end, too.

Abby Newman (Melissa Ordway) probably won’t be included in much of this, but that’s nothing new. She’s used to being the odd Newman out by now. However, Victor will be caught in the middle of his other children’s battle – and that could take a toll on his health.

Nikki Newman (Melody Thomas Scott) will definitely be concerned once she gets updates on Victor’s condition. She’ll fear that the constant family fighting could push Victor into the grave sooner. During new Y&R episodes the week of June 3-7, Victor will find himself stuck in the middle of the conflict. He’ll do his best to ease the tension and help everyone move forward, but that’s just not happening yet.

What will it take to end the family feud? Victor’s medical crisis may be a blessing in disguise – at least in a way. He’s bound to have a shocking episode and land in the hospital eventually. As Victor declines, we could get some deathbed drama and some promises to come together. Maybe some truces will be called as Victor’s kids bargain with him to survive.