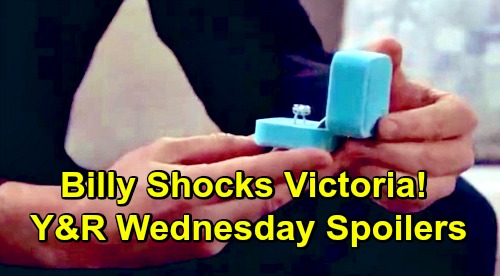 The Young and the Restless (Y&R) spoilers for Wednesday, April 17, tease that Billy Abbott (Jason Thompson) will stun Victoria Newman (Amelia Heinle) with a proposal. He knows Victoria wanted to take things slow, but he won’t see why they should wait. This is a huge step, but Billy won’t express any hesitation at all.

Y&R fans know Billy has fallen hard again, so he’s ready to lock this down and begin the final chapter of their love story. As far as Billy’s concerned, “Villy” is always going to be at the end of the book. Of course, Victoria will have some reservations about jumping into another marriage. She felt pressured by J.T. Hellstrom (Thad Luckinbill), so it’s a little insensitive of Billy to push this hard.

Nevertheless, Billy truly loves Victoria. He genuinely can’t wait to spend the rest of his life with her, which may score him some points. The Young and the Restless spoilers hint that Victoria may cave in soon enough. She’s craving safety and stability, so Billy can offer her those things. He can also offer love and familiarity, which makes him the perfect, easy match for Victoria right now.

On a less pleasant note, some dangerous drama’s about to go down. At Crimson Lights, Mariah Copeland (Camryn Grimes) will be chatting with Tessa Porter (Cait Fairbanks) when someone throws a brick through the window. Tessa might fear that her own threat has come back to haunt her, but an alarming message attached to the brick will suggest Mariah’s the one being targeted.

As a prominent Genoa City resident and the host of GC Buzz, Mariah has established quite a following. You don’t have a job like that without a few crazies coming out of the woodwork. If Mariah hasn’t paid attention to a stalker’s attempts to contact her, that could bring on a violent threat like this.

Then again, a recent line of dialogue that might offer another hint. Tessa thought Mariah was just humoring her about the new song, so Mariah insisted she wasn’t a liar. She quickly added that historically she kind of was, but not anymore. Maybe that was a setup to this new shocker. Y&R might play up Mariah’s past to remind viewers that Tessa’s not the only one with a troubling history.

However, we can’t ignore the possibility that this is a hate crime. Since “Teriah” often faces cruel attacks from fans who don’t want two women together, this plot might be a good teaching opportunity. By showing how far hate can go and how hurtful it can be, The Young and the Restless might impart a valuable lesson. Regardless, it’s great that Mariah and Tessa are getting a new story.

Other Young and the Restless spoilers say Cane Ashby (Daniel Goddard) will pull out all the stops. He’ll make grand plans for Lily Ashby’s (Christel Khalil) homecoming, which will include a spa day and lots of pampering. Unfortunately, Lily won’t be as receptive to Cane’s efforts as he’d hoped.

It sounds like some exciting scenes are on the way. We’ll give you updates as other Y&R news comes in. Stay tuned to the CBS soap and don’t forget to check CDL often for the latest Young and the Restless spoilers, updates, and news.