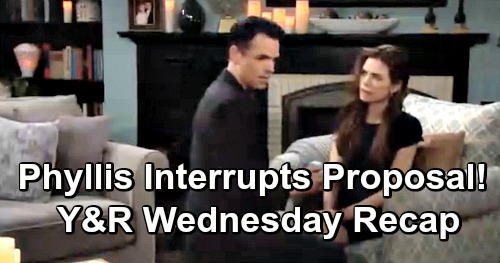 The Young and the Restless (Y&R) spoilers and recap for Wednesday, April 17, tease that Summer Abbott (Hunter King) will rant at Phyllis Summers (Gina Tognoni) for trying to destroy her marriage. She’ll be upset that Phyllis deemed a business deal more important, but she’ll eventually suggest this was payback. Summer will think Phyllis never got over her sleeping with Billy Abbott (Jason Thompson).

After Summer beats herself up over that choice, Phyllis will console her daughter. Talk will turn to Summer’s relationship with Kyle Abbott (Michael Mealor), which is complicated because of Lola Rosales (Sasha Calle). Summer will understand that Kyle still isn’t over his ex, but she’ll really want her marriage to work. She’ll advise Phyllis to start cleaning up her own mess of a life instead.

Other Young and the Restless spoilers say Billy will pop the question across town. After a sweet night in with the kids, Billy will get Victoria Newman (Amelia Heinle) alone for his surprise proposal. Unfortunately, Phyllis will start banging on the door before Victoria can give her answer.

At Top of the Tower, Cane Ashby (Daniel Goddard) will talk to the twins about Lily Ashby’s (Christel Khalil) homecoming tomorrow. He’ll also admit he’s going to resign from Chancellor and start reevaluating his life. Cane will be determined to win Lily back, but Mattie Ashby (Lexie Stevenson) and Charlie Ashby (Noah Alexander Gerry) will seem skeptical.

In fact, Mattie will chew Cane out for not accepting Lily’s decision. She’ll leave their table in a huff, so Charlie will warn his dad about living in denial. Nevertheless, Cane will refuse to give up on his marriage.

At Crimson Lights, Mariah Copeland (Camryn Grimes) will be ready to hear Tessa Porter’s (Cait Fairbanks) new song. Since they closed up early, they’ll have the place to themselves. Tessa will want honest feedback since she knows how important her second chance is. She won’t want to blow it with songs that aren’t worthy, so Mariah will promise to tell her the truth.

After Tessa plays her latest tune, Mariah will get choked up over it. She’ll think Tessa really puts her soul into her music. Next, they’ll chat over dinner and wine. Y&R spoilers say they’ll talk about how much they love each other before sharing a kiss. A brick will suddenly fly through the window with a frightening message attached, which says, “Give up the gossip, you’re ruining people’s lives.”

At the Abbott mansion, Jack Abbott (Peter Bergman) will argue with a surprising lucid Dina Mergeron (Marla Adams). She won’t agree with his new vision for Jabot, so Jack will end up lashing out over his abandonment issues. During a conversation with Traci Abbott (Beth Maitland) later, Jack will admit that he let a lot of resentment build and never worked through it.

Fortunately, Jack will have a chance to share some of his old heartache. A younger version of Dina Mergeron (Cathy Marks) will show up to chat with him. After Jack vents about Dina leaving her family, she’ll confess she was selfish. Dina will advise Jack to think about the present and decide if he wants to keep putting John Abbott’s (Jerry Douglas) dream first. She’ll think Jack should figure out what he wants for himself.