BY Heather Hughes on August 13, 2019 | Comments: one comment
Related : Soap Opera, Spoiler, Television, The Young and the Restless 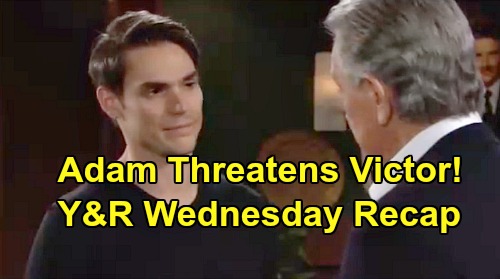 The Young and the Restless (Y&R) spoilers recap for Wednesday, August 14, tease that Abby Newman (Melissa Ordway) will bring her mom up to speed. She’ll tell Ashley Abbott (Eileen Davidson) about purchasing the Grand Phoenix and letting Phyllis Summers (Michelle Stafford) serve as the manager. Ashley will have some concerns about Phyllis’ involvement, but Abby will think she’s got everything under control.

Of course, Abby won’t feel the same way about her love life. She’ll fill Ashley in on her romance with Nate Hastings (Sean Dominic), but she won’t be certain of the situation. It’s tough to know where things stand since Abby’s been jerking Nate around and now he’s playing hard to get.

At Newman Enterprises, Jack Abbott (Peter Bergman) will pop in and use Victoria Newman (Amelia Heinle) as an excuse. Victor Newman (Eric Braeden) will suspect Jack’s really there to see how he’s holding up. Y&R spoilers say Jack will be pleased to see Victor’s doing better after his recent weak spell. The conversation will eventually shift to Adam Newman (Mark Grossman) and Victor’s issues with him.

Jack will feel like there’s hope for the future. He’ll push Victor to throw Adam a lifeline and save him from drowning. However, Victor will point out that he’s tried that repeatedly with Adam. He’ll contend that nothing he does is ever enough, so he’ll remain fed up with his son.

Other Young and the Restless spoilers say Adam will be served with a restraining order. He’ll get Michael Baldwin (Christian LeBlanc) on the phone right away and gripe about not being able to see Christian Newman (Alex Wilson). Michael will be pushed to fix this ASAP.

Meanwhile, Elena Dawson (Brytni Sarpy) will share her concerns about Adam with Devon Hamilton (Bryton James). She’ll be uneasy about Adam living right across from them, but Devon will offer reassurance. After Elena heads out, Adam will approach Devon to get jogger Elena’s view of the park situation with Christian. Devon will make it clear that Adam is to stay away from her.

Adam will counter that Victoria’s the one who lied about Christian being sick. He’ll bring Devon up to speed on the restraining order and realize Nick Newman (Joshua Morrow) wouldn’t have been powerful enough to make it happen.

At the coffeehouse, Elena will chat with Nate about Abby briefly before talk turns to work. There’s a residency opening at Memorial, so Nate will think Elena should go for it. He won’t want to force Elena into it or make her feel pressured, but he’ll feel like fate is stepping in here.

Later, Elena will let Devon know she’s decided to interview for the position. He’ll be taken aback since she was so distraught over losing a patent the other day. Even so, Devon will know Elena’s going to be a great doctor. Once Elena interviews and scores the job, she’ll return home to celebrate with Devon.

Back with Adam, he’ll show up at Victor’s office to rant about the restraining order. Victor will feel like he didn’t have a choice thanks to Adam’s behavior. He’ll argue that he’s only taking Christian’s side, but Adam will fume as old wounds are reopened. They’ll bicker as Adam suggests he wouldn’t have been such a disappointment if Victor had been there for him.

Victor will be sorry he ever gave Adam another chance. He won’t think Adam should stick around Genoa City, but Adam will disagree. The Young and the Restless spoilers say Adam will vow to take back his boys. He’ll add that he’s going to take everything away from Victor and the Newman clan, so this battle is just getting started!

At home, Lola Rosales (Sasha Calle) will explain the letter she’s been mulling over. She’ll tell Kyle Abbott (Michael Mealor) that her dad reached out and wants to be a family again. Since Lola doesn’t really feel like Adrian Rosales is family, she’ll determine that it’s best to keep moving forward. Afterward, Kyle and Lola will get lovey-dovey as they practice their wedding vows.

At the Abbott mansion, Kyle and Lola will be on hand for a brainstorming session. Jack and Ashley will hope to honor John Abbott’s (Jerry Douglas) name through a new name for their merging companies. Abby will be around for this meeting as well. In the end, they’ll all decide that only Jabot feels right.

Abby will meet up with Nate next to discuss their issues. She’ll note that if Nate wants someone else who’s ready for a real commitment, she’ll understand. Nate won’t be sure why Abby’s holding back, but he’ll think they should just take it day by day. Abby will ask Nate as her plus one to Kyle and Lola’s wedding, so we’ll see how they handle the family event.

Later, a toast to “Kola” will be made before Jack leaves for Miami. He’ll plan to keep his promise; Jack will fly to see Celeste Rosales (Eva LaRue) and refuse to come back without her! We’ll give you updates as other Y&R news comes in. Stay tuned to the CBS soap and don’t forget to check CDL often for the latest Young and the Restless spoilers, updates and news.