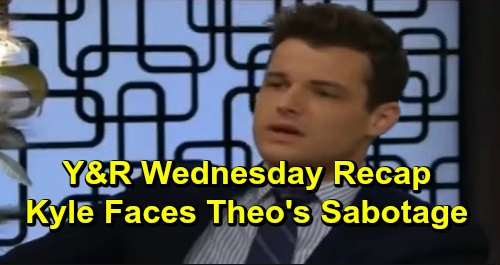 The Young and the Restless (Y&R) spoilers recap for Wednesday, December 18, teases that Theo Vanderway (Tyler Johnson) will share some new ideas with Jack Abbott (Peter Bergman) and Summer Newman (Hunter King). At Jabot, Theo will impress them with a Valentine’s Day pitch, but Jack will want Theo to concentrate on closing a big deal. After Theo mentions the meeting he has scheduled for tomorrow, Kyle Abbott (Michael Mealor) will appear and insist it was today.

Theo won’t understand how he could’ve missed it, but he’ll get on the phone and manage to fix things with the client. Once Theo’s alone with Kyle, he’ll confront his cousin about the confirmed appointment. Theo will suspect that Kyle set him up, but Kyle will argue that he’d never sabotage Theo at the company’s expense.

Over with Jack, he’ll urge Summer to take a step back from the situation. Jack will hope this can be a learning opportunity for Theo and a chance for Kyle to figure out his management style. Afterward, Kyle will fill Summer in on Theo’s accusation. They’ll end up chatting at the Grand Phoenix, where Summer will insist she’s going to remain neutral. She’ll just want Kyle to remember that as the boss, he needs to bring out the best in Theo and rise above any games.

Back with Jack, he’ll want to make sure Theo’s truly ready for this meeting. Jack will suggest that although they’re family, Theo’s not going to get any special treatment. Once Theo promises there’ll be no more mistakes, Jack will assure him that he really wants this to work out.

At home, Billy Abbott (Jason Thompson) will have breakfast ready for Victoria Newman (Amelia Heinle). She’ll want to make it fast since she has to get to the office. In his head, Billy will tell himself to keep smiling and fake it ‘til he makes it. He’ll also give Victoria updates on his new consulting job in Chicago, which means he’ll have to be away from time to time. Billy will hope for a little celebration upstairs, but Victoria will have to dash off.

At Devon Hamilton’s (Bryton James) penthouse, he’ll confuse Elena Dawson (Brytni Sarpy) by insisting they don’t know what Amanda Sinclair (Mishael Morgan) is capable of. Devon will think they should be a team and get Amanda to leave Genoa City. Once Devon leaves, Elena will snoop and discover the hidden dossier.

Meanwhile, Y&R spoilers say Devon will track Amanda down at the hotel. He’ll mention that his own attorney has advised him to take legal action. Amanda won’t think that’ll stick since she was just doing her job. Devon’s the one who decided to give away all his money. Amanda will add that she hasn’t had any trouble scoring more clients and intends to stick around.

On the Crimson Lights patio, Nate Hastings (Sean Dominic) will chat with Elena about how it’s best to think of Amanda as a victim, too. Elena won’t be so sure that’s true anymore. She’ll admit she’s wondering if she was wrong about Elena after all. Nate will worry that Elena’s becoming obsessed, so she’ll talk about Amanda and Hilary Hamilton (Mishael Morgan) being intertwined in her head.

The conversation will shift to Devon and how he may be seeking a reason not to let go. That’s the view Nate will have, but Elena will be adamant about the risk Amanda poses. In the main area of the coffeehouse, Billy will catch up with Amanda. She’ll finally come right out and ask if he’s looking to have an affair. Billy will insist he isn’t, but he’ll flip the question around and wonder if Amanda’s trying to sleep with him.

Amanda will confirm that she doesn’t want an affair either, so talk will turn to Billy’s relationship with Victoria. Although Billy feels out of place in his perfect life, he’ll be glad he can still get wild with his almost wife. At Newman Enterprises, Victor Newman (Eric Braeden) will drop by to see Victoria. He’ll confess that he misses work, but he’ll assure Victoria that he doesn’t plan to swoop back in.

Victor will also ask how things are going with Billy, so she’ll insist they couldn’t be happier. After Victor calls Billy a house husband, Victoria will tell him about Billy’s new job. Later, Billy will reconvene with Victoria and hope they can have a night of fun in Chicago. Once Victoria turns Billy down, he’ll suggest he was kidding but will look glum about it.

Next, The Young and the Restless spoilers say Billy will exchange texts with Amanda. He’ll send her a message about how friends are people who share a bond of mutual affection – exclusive of sexual favors. Amanda will text back to thank Billy for the vocabulary lesson. Back at Devon’s place, he’ll come home to find that the file was moved and take off again.